As part of the ongoing work to build inclusive excellence at King School, and in recognition of Black History Month, Middle School students are celebrating the countless contributions of Black heroes.

Grade 8 students spearheaded an initiative to feature a hero in each morning announcement. Students are sharing an article of interest and a YouTube clip that highlights each person’s accomplishments.

“I think it is really interesting that we are learning about different people who were heroes before, during, and after the civil rights movement,” states Middle School Co-President Anya Anderson ’25. “We are trying to learn more about people who may not have been better known so that we can show greater respect for them,” she adds.

Students in grade 8 have already identified these heroes to celebrate:

— Amanda Gorman: American poet and activist who was the first person to be named National Youth Poet.

— Sir William Arthur Lewis: Professor of Political Economy at Princeton University who won the 1979 Nobel prize in Economics for his research into economic development.

Students in grades 6 and 7 have built upon the grade 8 initiative by creating slides featuring the change-makers and facts about how each individual has made the world a more equitable place. Students share these inspiring stories in their daily Advisory. 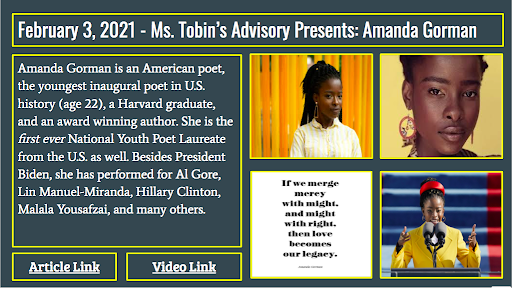 Through their Humanities classes, Middle School students are also studying current events that highlight Black individuals' contributions and accomplishments in the here and now.

For example, students have recently discussed the possible redesign of the $20 bill to add the portrait of American abolitionist and political activist Harriet Tubman. Amanda Gorman's historic presence as the first poet to ever appear at the Super Bowl pre-show also sparked discussion by the students.

Middle School DEI Coordinator Stephanie Hoos emphasizes, “Connecting the past with the present is an ongoing effort in our courses to impart to the students that Black History Month is not only a celebration of what has already occurred, but also is a continuous representation of contributions that Black and Brown people have made in the past and will continue to make to our future.”