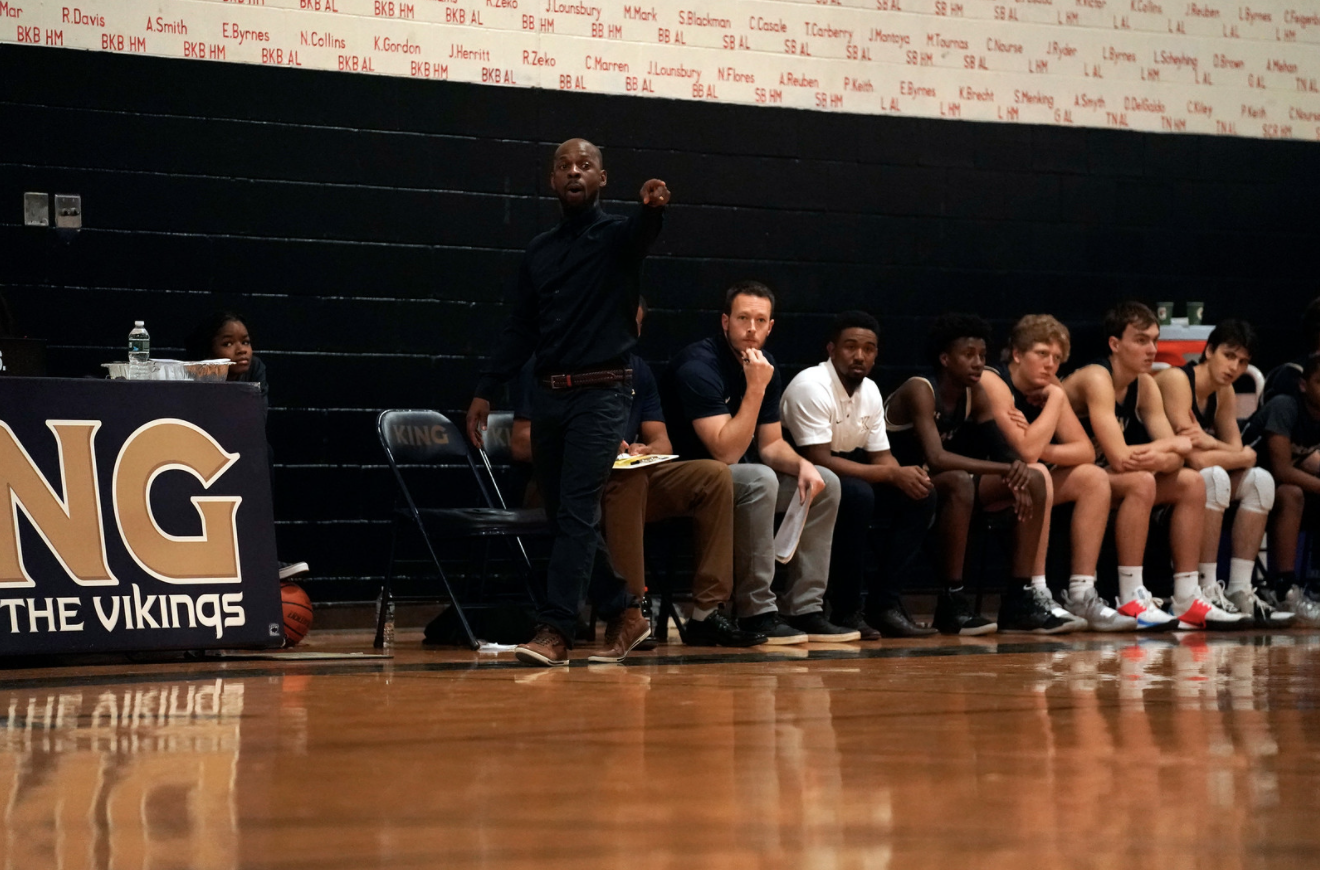 In late June on the campus of Avon Old Farms, over 500 basketball players competing at NEPSAC schools throughout New England packed the gym in Avon, Connecticut for the NEPSAC NCAA Scholastic Showcase and the chance to turn some heads.

This wasn't just another basketball camp. This was the opportunity for basketball players to shine in front of college coaches from over more than 100 NCAA Division 1 programs including Duke, Indiana, UCLA, Iowa, Notre Dame, West Virginia, Tennessee, Arizona, Virginia and Yale, just to name a few. King School was well-represented at Avon Old Farms, with Varsity Boys Basketball head coach Nate Jean-Baptiste leading a five-man squad consisting of Danny Acosta ('22), Charlie VonOehsen ('22), Sajan Porter ('22), AJ Mickens ('24), and Nasir Pettigrew ('24) onto the court to display their talents together. While the Vikings 5 went 2-1 in their NEPSAC Showcase during the three day event, the experiences they came away with holds immense value and continues to have a lasting impact that extends well beyond the court.

"Leading five players from King Basketball at the NEPSAC Showcase was really a pleasure to see as it only strengthens and encourages our program to keep teaching the game the 'right way' and stresses the importance of accountability," said Coach Nate.

"Having our five core players competing against some of the best talent in the New England area and in front of college coaches will only further prepare them mentally and physically for the upcoming season. My message to them was: Connect mentally to the game and each possession. Be aggressive defensively and patient offensively. I firmly believe that each player learned a bit more about themselves and will bring what was acquired at the Showcase to practices and games going forward."

In addition to Coach Nate, Charlie VonOehsen, AJ Mickens, and Danny Acosta each shared about their personal experiences from participating in the NEPSAC NCAA Scholastic Showcase and how their time competing against other players from around New England will benefit King Basketball now and in the future... 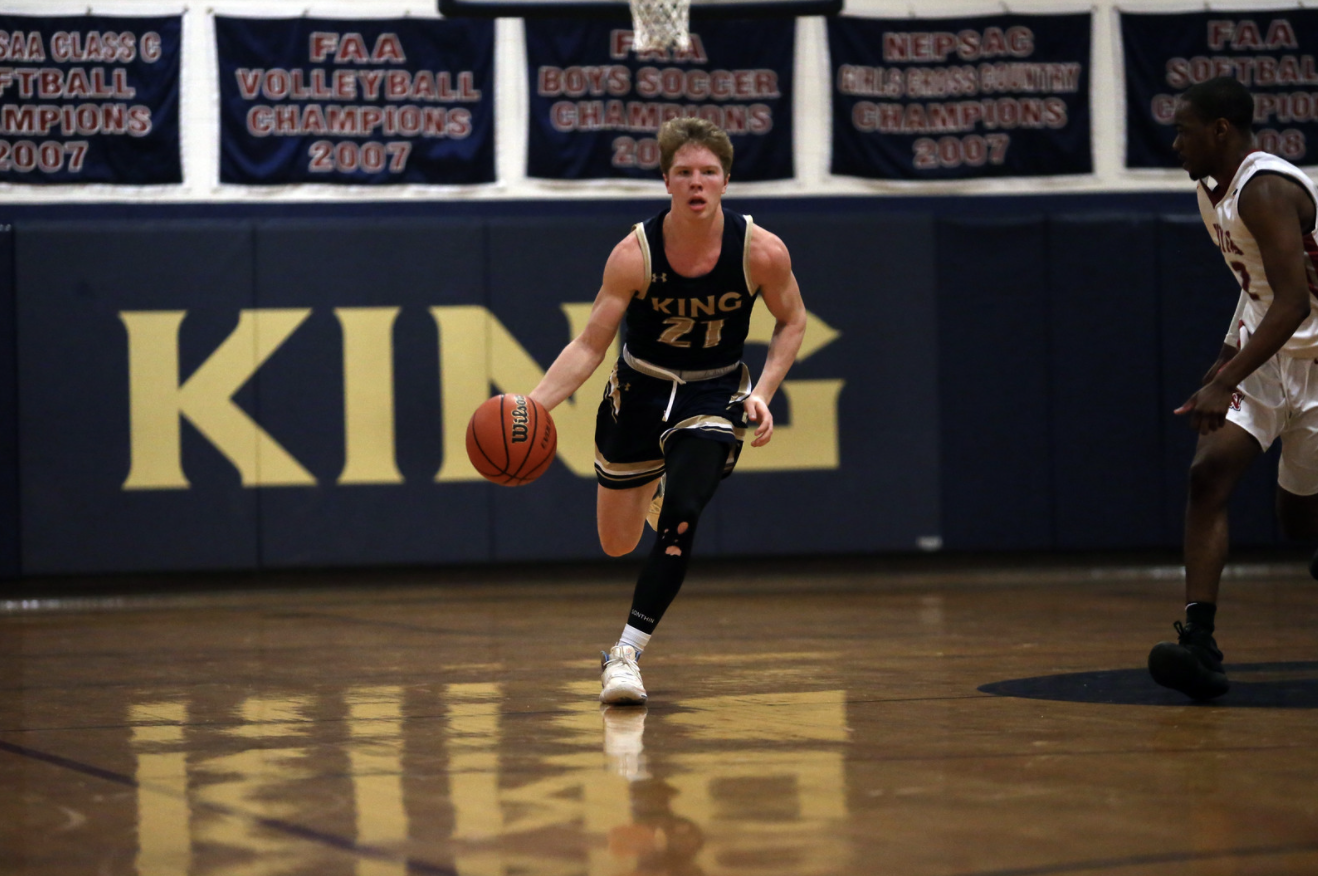 It meant a whole lot to play at this NEPSAC event. It showed me how I stack up against other great players and what I need to work on. To try and calm my nerves, I thought back to how hard I've been working and understanding that as long as I play my hardest, there's nothing else I can do.

Playing with my fellow King teammates was a great experience. Regardless of how they or I played, we all had a blast together on the court and in between games. Most of us only having played a small number of games together, it took us a bit to understand how to play with each other, but once it clicked it was like clock work. Our third game together was one of the most fun games I've played and definitely our best game as a unit.

We had a strong group of guys who will be playing a lot with each other next season. Going out there with a lot of pressure for ourselves is very good practice for those important games or clutch moments that we will face next year. We will only get better with each game that we play as we continue to learn each other's strengths and figure out the best way for each of us to be effective for the team.

Becoming a Senior this coming school year, there is only so much time before I'm off to college. My number one goal is to become a college basketball player at a school that I will love, so I'm playing basketball 6-7 days a week. Whether it's pickup, scrimmages, workouts, just getting up shots, or a combination of each, I'm having a very basketball filled summer. I'm working on all aspects of my game, but putting extra emphasis on my shooting ability and my offensive game off the ball. Along with that, I have 3 lifts a week working on my body. I also have numerous basketball camps to get as much exposure as possible.

Playing with so many other NEPSAC schools, what I will remember the most is how well we were able to compete with them. After each game we played, we got a better feel for each other and continued to improve. 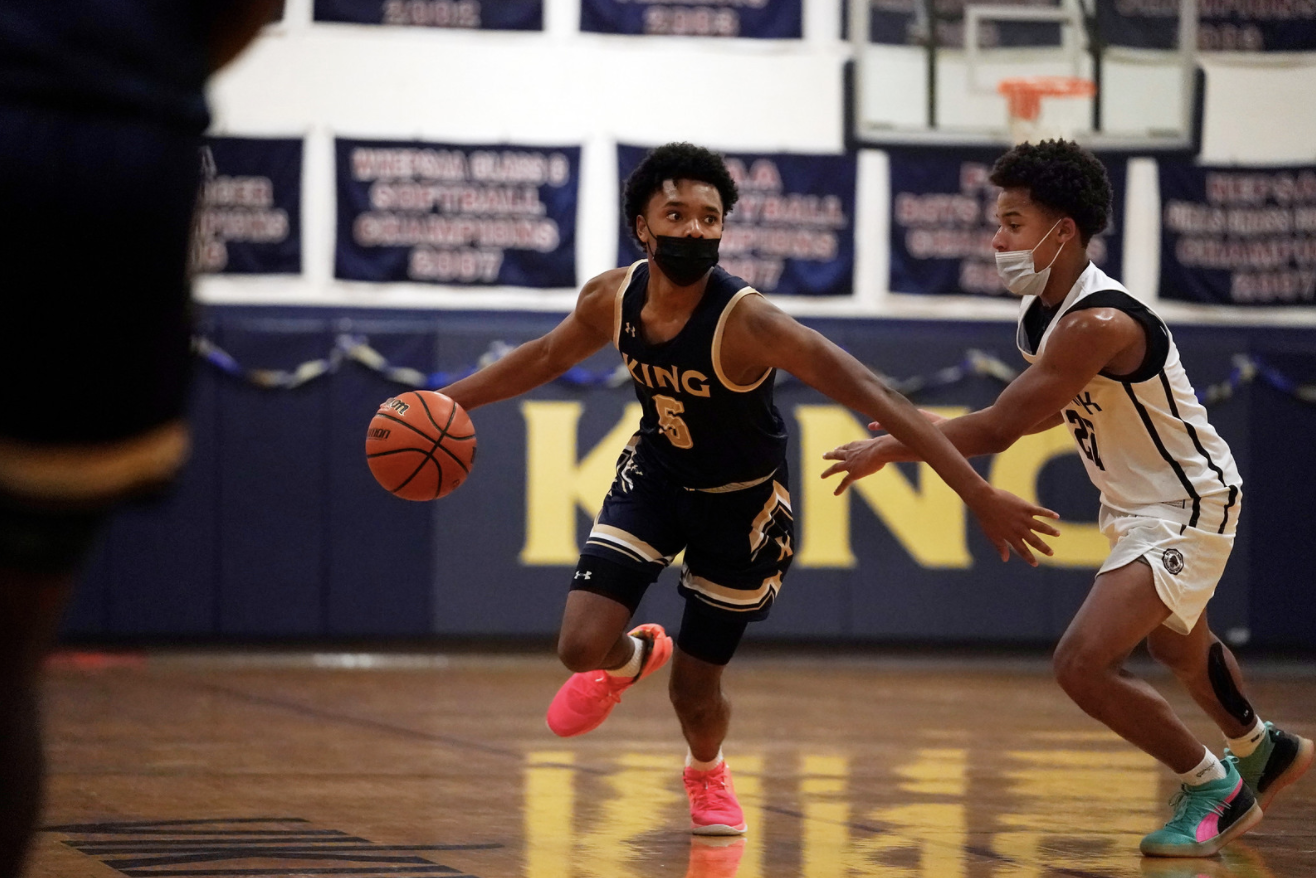 Going into the NEPSAC Showcase I expected to play against some high level competition and showcase my skills in front of college coaches. I had never been to a college live event before, so playing in front of that many college coaches was a new experience for me. I tried not to let knowing colleges were going to be in attendance affect my mindset, I just went into the showcase like any other game knowing my abilities.

It was great playing with my King brothers and having that experience. I feel the time we spent during the weekend of the Showcase really made us closer. For me, playing together in this Showcase helped us build even more trust in each other going into the next basketball season at King.

Coach Nate's biggest message to us was for us not to play selfish and make sure we used and trusted each other to make the right play on the court. I will just remember that there are so many kids that have the same dreams as me, which is to play college basketball. It was also just great to see how big and competitive the NEPSAC is and how there is such a wide range of levels in which schools compete at.

I have been doing a mixture of basketball and physical workouts throughout the summer, filled with AAU tournaments all over the country and more showcases and camps. The hard work to get better continues. 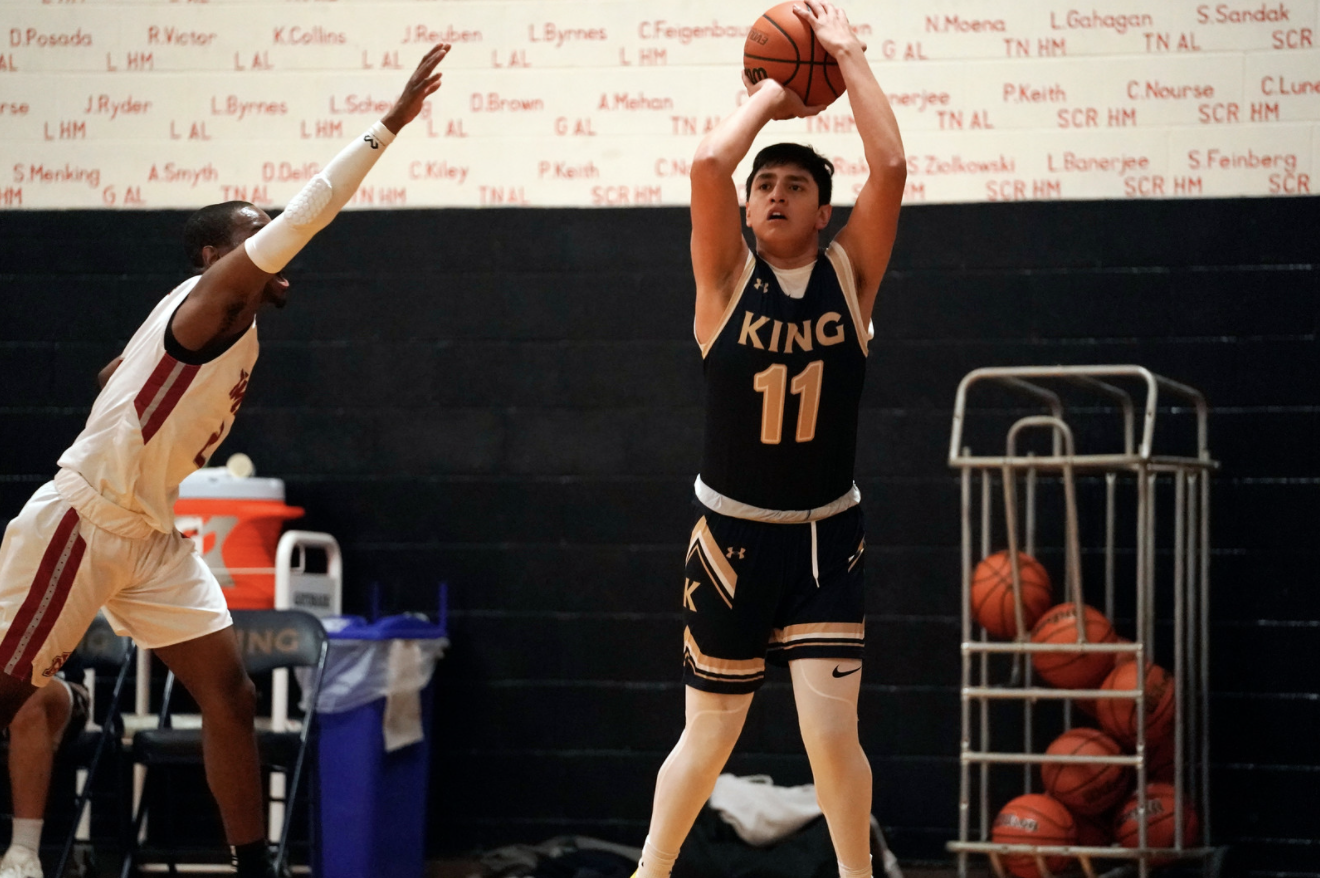 I expected a lot of coaches and a lot of talented basketball players at the NEPSAC Showcase. It definitely put the pressure on the experience knowing that every moment of every game, the eyes were on me. I knew that coaches would be examining us which only made me want to work and play even better. It meant a lot being able to compete and work alongside some great players that are in our New England region. It was an amazing experience and opportunity that I enjoyed being a part of.

I have never been involved in a showcase like this before, especially one this big. But for starters, I was able to play alongside my teammates which was great. Compared to other camps, you didn't have your teammates alongside you. I was definitely nervous coming into the camp, but taking the floor with my teammates allowed me to calm myself down and play my style of basketball. At other camps, mostly you wouldn't be familiar with your teammates and their style of play.

My mindset going into the NEPSAC Showcase knowing that there would be coaches was the same. Go out, play hard, and don't be afraid. I knew all of that hard work in the gym was going to show itself on the court. It was that simple. We saw that the five of us competed and did very well against some talented groups of players. We connected and have a much better understanding of each other on the court. We understood each other's weaknesses and played to each other's strengths. Our chemistry had a huge presence in our game as we looked out for each other during the games when we took the court. Our 2021 season at King is definitely going to reflect the type of bond my teammates and I have and that showed at this Showcase.

At this point in the Summer, my basketball routine consists of daily workouts. I get in the gym and take a bunch of shots. Monday, Wednesday and Friday, I get some work in with one of our trainers. We work on cutting, rolling to the basket or popping out for a three-point shot, catching and shooting and attacking the rim.

I couldn't have had more fun at the NEPSAC Showcase. We really connected as a team and we saw the strength of our team chemistry. Once we clicked, we showed that we could do some really special things on the court. We definitely will do the same next season, no doubt. What I will remember the most from the NEPSAC Showcase is the fact that my teammates and I were able to experience this together. It was a blast.