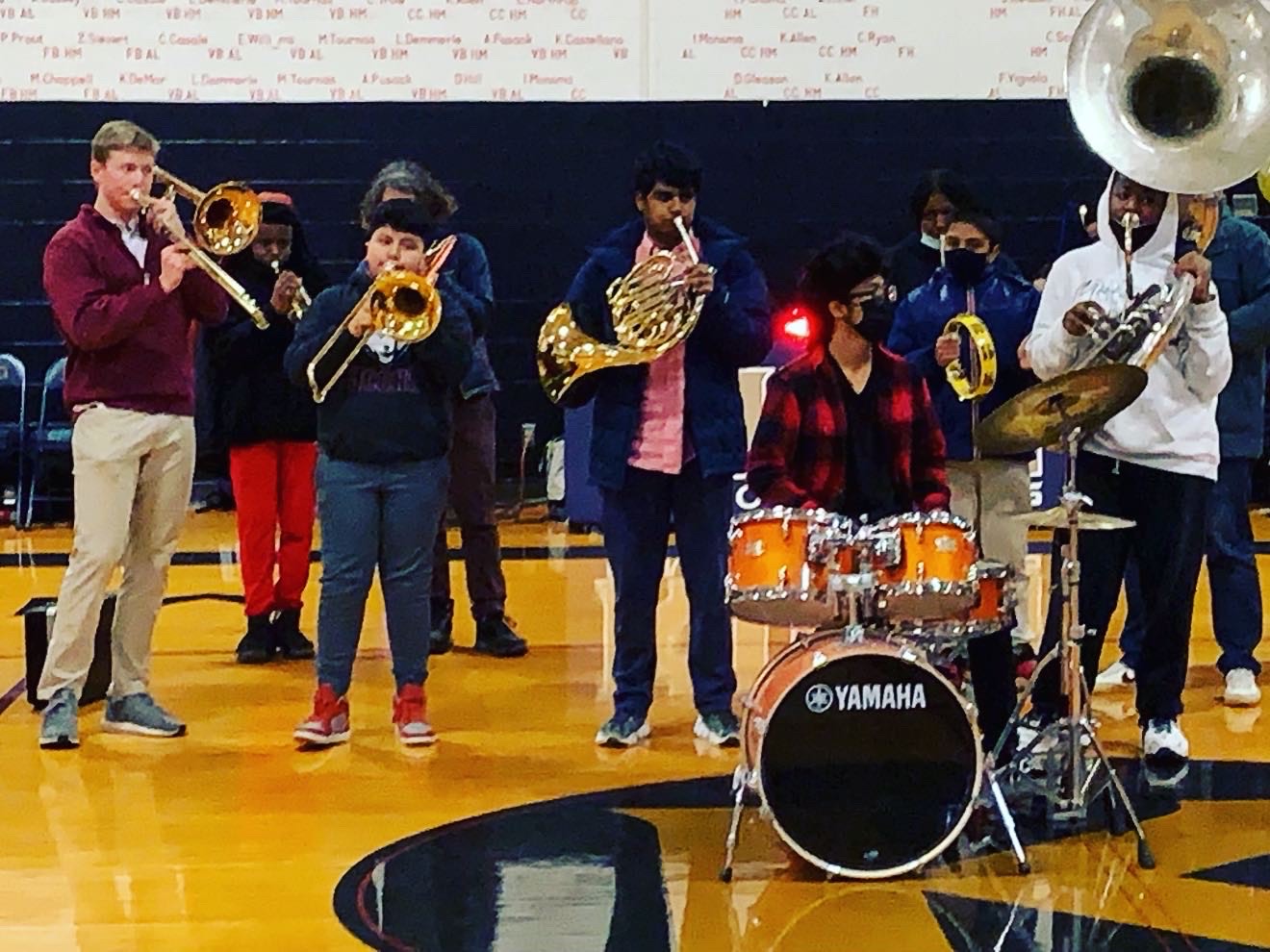 It was easily the biggest play of the game. With King Varsity Girls Basketball trailing by three points at halftime on Senior Day celebrating the trio of Emmie Freeman, Catelyn Peters, and Mariana McOsker, a collective of students from King and Project Music took to center court in the Upper School Gym with instruments in-hand and the chance to showcase their musical talents.

This year King School has partnered with Project Music for an immersive music and homework support program for students from the Stamford Public Schools, including two halftime performances during Varsity Girls Basketball and Varsity Boys Basketball games this week.

"Project Music is thrilled to be performing at the halftime of the girls and boys varsity basketball games.  It is a way for us to show our gratitude to King School for hosting the main Project Music program on campus four days a week," said Garrett Mendez, Director of Instrumental Music at King.

After trailing at halftime 20-17, the Vikings rallied to lead Masters 47-44 with 1 minute left to play thanks to a big three-pointer by Meredith Joo. While a late game steal by Emily Cook secured a victory for King, having Project Music perform during the half helped give the Vikings and fans in attendance a needed boost. Over the last eight years, Project Music has been shooting their shot by using the transformative power of music to effect positive social change for the students most in need of access, opportunity, and inspiration. Founded in July of 2014 by music educators Garrett Mendez, Ian Taylor and board members Joyce DiCamillo, Christel Truglia and Mort Lowenthal, the Stamford-based program takes inspiration from a previous iteration of Project Music founded by Stamford music teacher and then State Senator, Anthony Truglia in 1967, and is shaped in the image of the revolutionary Venezuelan music education initiative known as "El Sistema".

In addition to Project Music's two halftime performances at the Varsity Girls Basketball and Varsity Boys Basketball games, King Upper School students also formed a club to help with homework assistance and are busy planning a "Battle of the Bands" fundraiser for later this spring.

It's already shaping up to be another win-win for Project Music and King School.