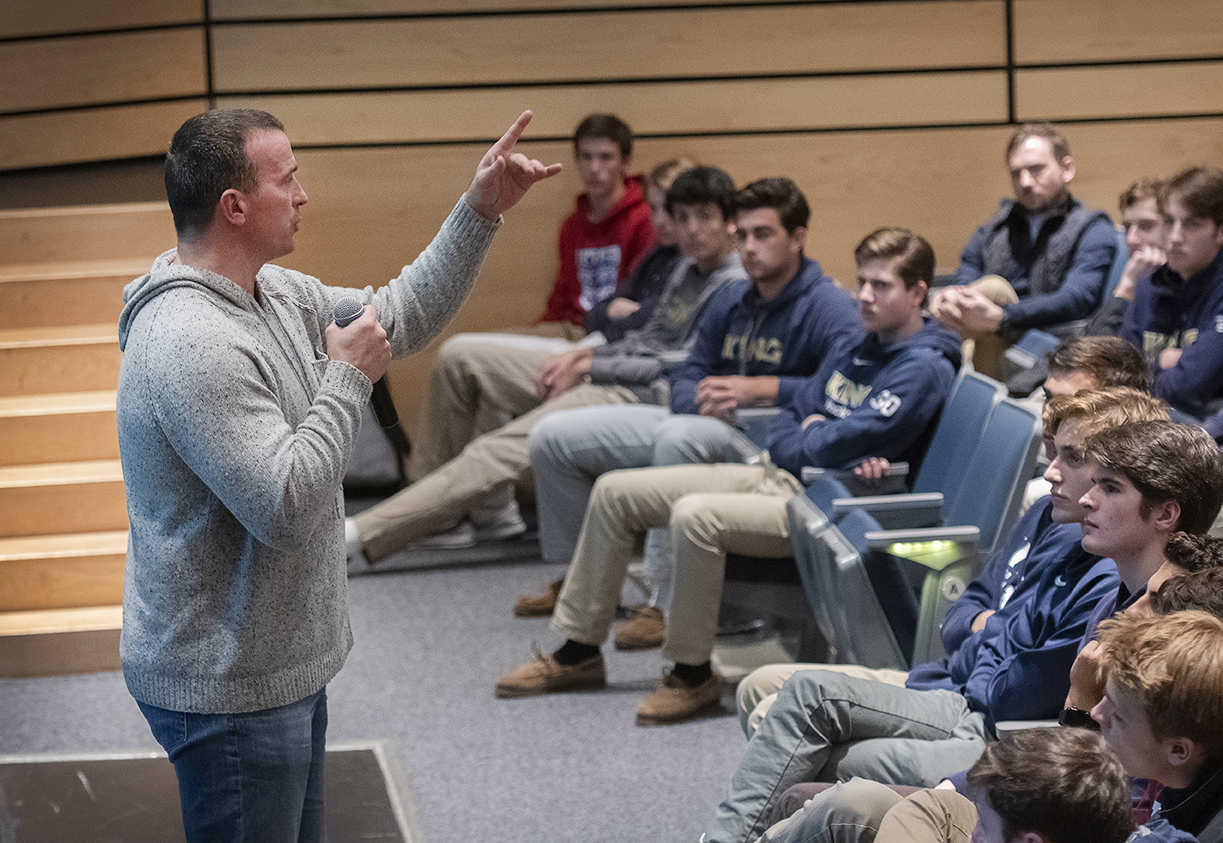 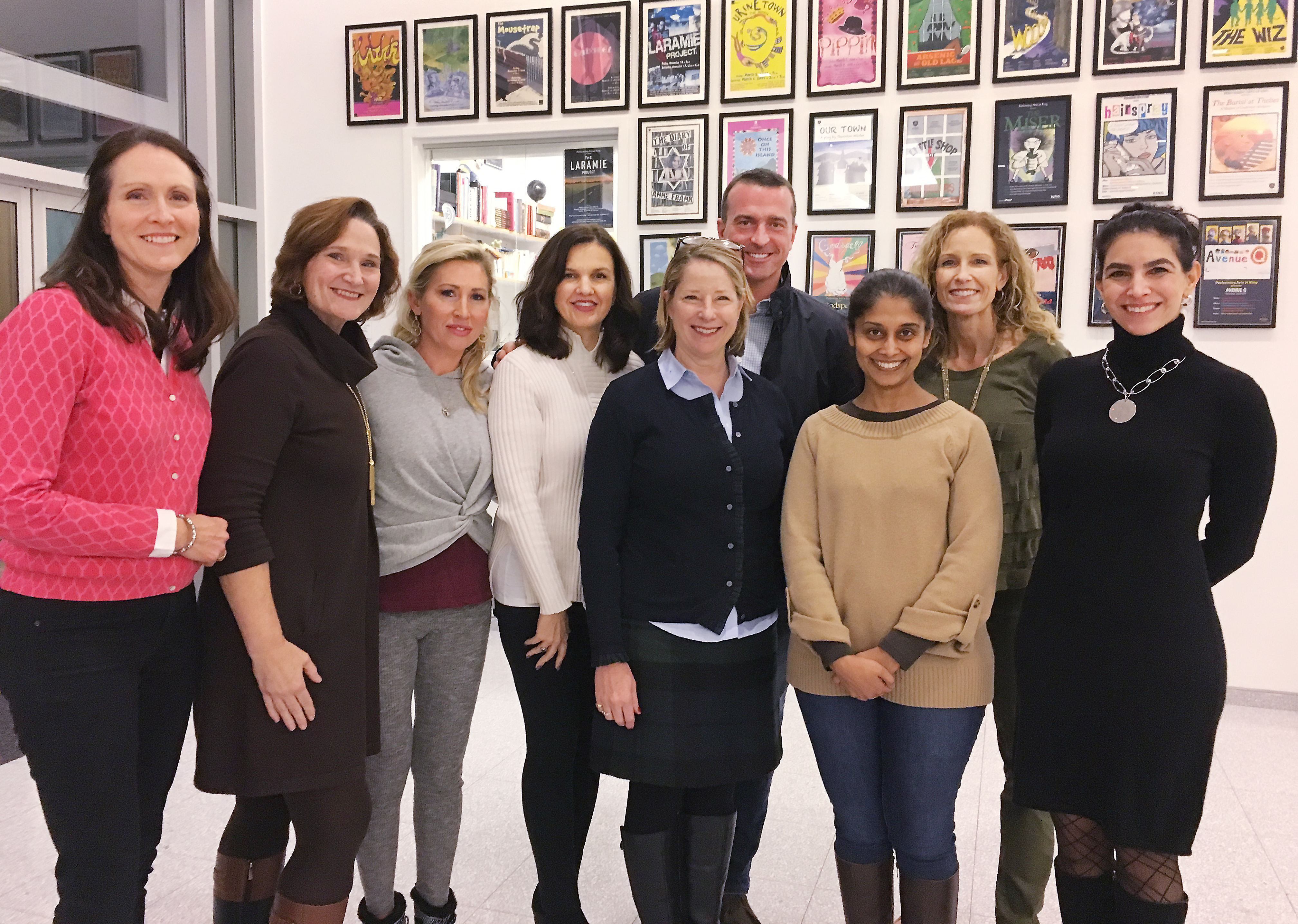 On Tuesday, January 8, the Parents' Association welcomed Chris Herren, former college basketball and NBA star, to talk to the King Community. Chris talked about his incredible basketball career, his rise to the NBA and how he lost it all due to substance abuse. This evening event was planned in conjunction with the student event, which took place earlier that afternoon, where Chris talked about teenage drinking, peer pressure and prescription and gateway drugs. Chris was brutally honest in talking to the parents about his experiences and how his decisions took him from realizing his dreams as a NBA player to the realities of drug addition.

"What made Chris Herren different from other speakers was his obvious passion and commitment to better the lives of all the individuals he meets. He also showed the lasting effects drugs can have not only on yourself, but others around you, specifically your family. We each have a person who looks up to us or relies on us no matter our age, a gift that requires the upmost care and responsibility. He revealed that one bad decision can irreversibly damage our ability to carry out those important emotional and physical tasks. The most memorable part of his talk, however, was his ability to shine light on the strength of sobriety, and place it on a high pedestal, while lessening the imagined cool and prestigious identity substances psychologically imprint on their victims. He really drilled into our minds that there was nothing cool about using drugs or alcohol because there is nothing cool about pretending to be someone you aren't, or living a double life controlled by a measly object rather than an irreplaceable soul. He not only revealed the tragedies of substance abuse, but the success stories. He did this by furthering the idea that just because you open one door, does not mean you can close it on your own. Sometimes you need help to close that door and truly seal it shut, not leave it ajar like so many of us do with our demons." Amelia Whiteley '19

"My number one take away from the presentation is that drugs and alcohol do not affect just you but also those around you such as your family members and friends. I thought the presentation was very insightful and eye opening." Louise Dill '19

"This was one of the best presentations that I have seen at King over my three years. It was extremely informative and Mr. Herren made sure that we knew that there is always someone there for you. Even when people are in the lowest of the lows, someone will help them get out of it. This was my number one takeaway." Grady Boruchin '19

"We started the day with an assembly where myself, Mr. Coulombe, and Ms. Sadlowsky talked about community and the new year. Mr. Herren's presentation fit in perfectly with our discussions and ideas of community. I was blown away, as were the other students, by his stories. The students were engaged and I think they really took what Mr. Herren said to heart, I know I did. My biggest takeaway was that we can change and grow and there are so many people who want to support us, especially at King." Luke Buttenwieser '19

"I feel as though Chris Herren was the most influential and beneficial speaker we have ever had at King. He captivated students not only with his own story but with stories of kids just like us from around the country. Furthermore, he made the topics of drugs and alcohol much more relatable than any previous speaker I have seen who addressed the topic. After the presentation, I spoke with many members of the community and everyone agreed how truly impactful Chris Herren's speech was. My number one takeaway is that addiction can happen to anyone and that students around the country have stories in which they have faced the struggles of addiction in their own lives." Jordan Kulick '19

A few parents who attended the discussion had this feedback:

"It is so refreshing to listen to a speaker who touches a subject that is so important and yet so stigmatized in our society. Addiction is a very touchy subject, but sadly it is around us. To be able to have these conversations with someone who is willing to open up in the way that Chris Herren did is a gift. What a humbling experience for our children to be able to listen to his story. For our kids to see the impact that one single action has is priceless. There was not one student in that auditorium who did not feel the intense, honest, and humbling story that Mr. Herren shared with them. Thank you."

"Our two high schoolers came home Tuesday talking about the Chris Herren presentation, and it was obvious Chris had made quite an impression on both of them."

"My husband and I attended the parent event which we thought was incredible. The combination of having a speaker like Chris spend time during the day with the students, and then stay to present to parents was a very effective way to get across this important message. All in all, our family was quite impressed. Thanks, King, for providing this opportunity for our community!"

"It was a great opportunity for the students to listen to Chris Herren who had achieved so much and lost so much due to substance abuse. My children were very affected by the student event, so I didn't want to miss the parent's evening event. I was so impressed, the candor with which Chris spoke and the choices he made were incredible. Chris spoke with such an intensity and questioned society's acceptance of teenage drinking and some of the choices teenagers and parents make. From this event, my children and I have had a number of important discussions about their choices in different social situations."

"What stood out to me was when Chris said that parent pressure has become much more of an influence on our children's behavior than peer pressure."
"Chris reminded me how important it is to have an open dialogue with kids and to start the discussion when they're young."

Thank you to the Parents' Association for providing this insightful and important presentation.