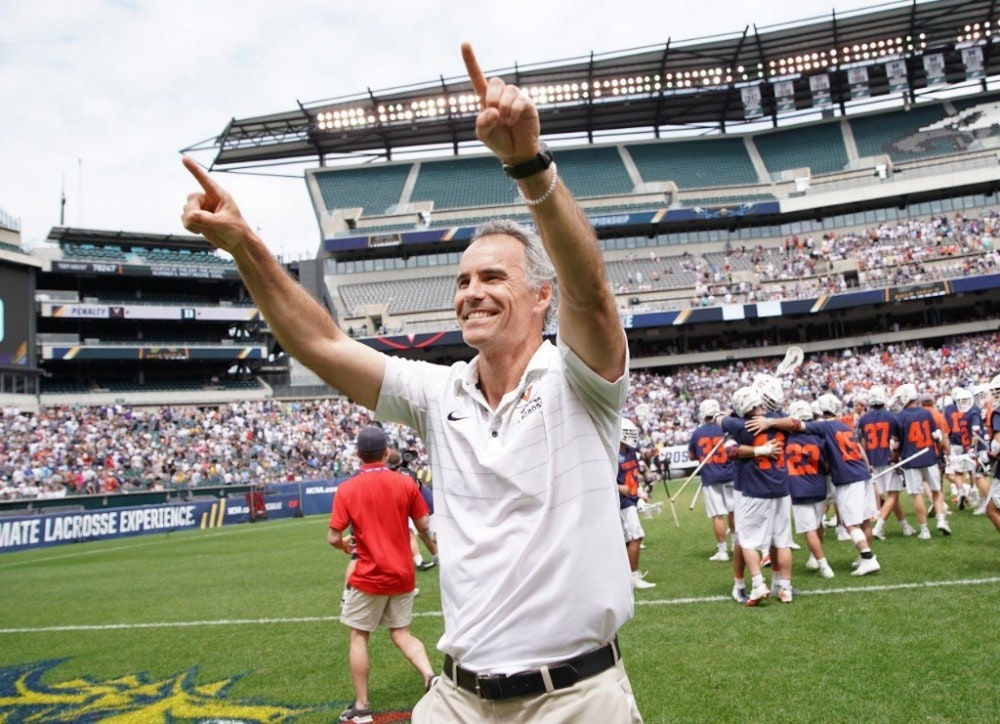 In just his third season at UVA, Coach Tiffany helped complete the rebuild of a college lacrosse program, earned ACC Coach-of-the-Year honors, and led the Cavaliers to a national championship over defending champs Yale (13-9) in front of 31,528 fans at Lincoln Financial Field in Philadelphia. Prior to his visit to King, Coach Tiffany caught up for a quick Q&A and shared his thoughts on Virginia’s unforgettable title run, what it really takes to grow as a college player and coach, and what he feels are the three most important attributes and characteristics college coaches look for from prospective student-athletes…

Now that the season has come to a close, what will you remember most about this experience and the accomplishment of capturing a national championship at UVA?

Amongst the many memories, I will never forget the positivity and joy that emanated from our men during an early-season Friday practice at Princeton, despite our record sitting at 1 win and 2 losses. I will remember how invigorated and intense the men were during a heavy weight room session only 18 hours after defeating John Hopkins in a physically draining contest. And I will remember the stick maker Alfie Jacques handing our staff one of his creations in our team locker room inside the Carrier Dome after a win over Syracuse, sharing with us the spirit of the game.

During this postseason run that resulted in the program’s sixth national championship, what was your overall message to the team?

We are on a mission. Lock the Gates. Empty the Tank.

Three years ago when you arrived on campus at Virginia, you spoke passionately about setting "a very high bar for measuring success." What are some team attributes you feel helped lead to a successful championship season in Charlottesville? And what's key to maintaining that level of success?

The team’s willingness to create fun, alcohol-free social events and weekend nights was vital. The captains, especially David Smith, had the fortitude to speak truth to power, ensuring no one voice dominated and that decisions were more often made democratically. In order to maintain the high level of success realized in 2019, we must continue to pursue a stranglehold of strength in culture and mindset. We cannot rest on the laurels of our cultural gains: each year, a new composition of the roster demands we attend to the new dynamics and relationships.

What does it mean to you to be able to come share your story at King from your experiences as a head lacrosse coach and former player yourself?

My objective is this: that through sharing my journey with lacrosse as a boy, young man, and coach, I will spread the true spirit of the game and create a greater excitement and passion amongst others.

You have been known as a coach who likes to play an up-tempo and free flowing offense....what kind of player were you growing up? How did that impact your own coaching style?

The game of lacrosse was invented by Native Americans and utilized for a number of purposes: physical development of boys into men, the settling of disputes amongst tribes, and medicinal and healing purposes amongst others. I was fortunate to grow up with Onondagas, the People of the Longhouse. This allowed me to learn first-hand the critical role lacrosse served to their way of life. The lacrosse I experienced with my Onondaga friends was an aggressive, fearless style. It is a style that I have always strived to employ with our teams, for both strategically advantageous purposes, and to respectfully honor the game.

Who has influenced you the most as a player or even now as a head coach?

Dom Starsia has had the greatest impact upon me as a player and coach. Dom was the head coach at Brown University during my college playing days and he went on to serve as the head coach at the University of Virginia, the same post I now fill. Throughout my playing and coaching careers, Dom has been a guiding force for me. I have leaned on Dom as a mentor and moral compass: his ability to make others feel supported and loved while guiding them has been a gift to many.

What do you feel are the most important attributes and characteristics college coaches are looking for in high school-athletes they are recruiting for their programs?

Grit: toughness is a must.

Open-minded: willing to learn and accept they have areas to improve.

What has been your favorite part about working with your team at the University of Virginia?

Being with the men is the best part of coaching at the University of Virginia. The time spent in the weight room, in the film room, in our cultural meetings, and certainly on the field, are the most rewarding of moments in Charlottesville. We love living in the foothills of the Blue Ridge Mountains and we appreciate the intellectual prowess of the community we share with outstanding faculty and students. But nothing beats the time with the men.

If you are interested in the special opportunity to learn from one of the best college lacrosse coaches in the country at the Middle School clinic on June 25, please reach out to King School Head Boys Lacrosse Coach, Marc Saracino, at msaracino@kingschoolct.org.

Please use this link to register for the reception and Coach Tiffany’s talk in the PAC starting at 7:15 p.m.

Follow us on social media (Twitter/Instagram) and stay connected on the latest news and updates from King Athletics.