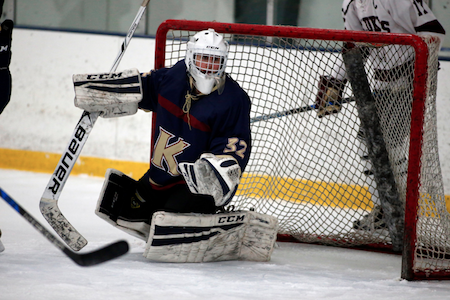 Before the start of the 2018-19 King School Varsity Ice Hockey season, head coach Guy Savage gathered the team together and spoke openly and from the heart about the importance of creating a culture of sustained success. Now with the second half of the Vikings' season underway and big wins under their belt, Savage can count on the timely play of Junior goalie Charlie Feinstein as a major contributor to the success of the Vikings this Winter.

"Charlie has been great for us this season. He's a very easy going young man and nothing seems to rattle him. He has grown so much from last year, both physically and mentally," Savage said.

"He gives our team a chance to win every time he's in the net. Our boys play with so much confidence knowing Charlie is back there between the pipes."

On the season, Charlie has helped lead the Vikings to some of the program's biggest victories in recent memory, including a 5-2 win at Brunswick, a 6-4 win at Harvey School, and a 3-0 sweep at the City Jamboree. The proof is in the personal numbers too: last season, Charlie's goals against average was 3.20 with an .867 save percentage. This season alone, he has earned a 2.67 goals against average with an impressive .912 save percentage.

Charlie Feinstein shared his thoughts about forming a hockey brotherhood this season, how he's grown as a player, and emerging as a leader on the ice for the Vikings...

What was your mindset heading into this ice hockey season and the chance to leave your mark as a Junior?

My mindset going into the season was just to push myself to get better every practice to help better the team. Overall, I hoped the team would be improved from last year, and the goal will always be to win an FAA championship.

You guys have put together a remarkable season so far, complete with a 3-0 sweep at the City Jamboree earlier in the Winter. What has made this team and season so special?

I think the main reason we have been performing so well this year is that we practically brought back the core group of players from last year and great new addition from the freshman and new students. Our team is like a brotherhood and everyone looks out for each other. Coach Savage has instilled that mentality in us ever since he has joined the program.

Much of the teams' success has been in part to your impressive play in goal...how have you grown as a player this season?

I think as a player I have grown in just being more aware, I have started to talk more on the ice and realize when there is a defensive breakdown, etc... I think that being more aware has benefited me greatly as I can now see the play developing in front of me. The drills we do in practice have also made me more aware as in some drills there are shots coming in rapidly from different angles.

How would you describe your leadership style? Can you give an example from this season where you've had to use that leadership skill?

I think I have a more relaxed style of leadership and am not too hard on the guys. For example, after a defenseman makes a bad pass or plays I just try to cheer them up and get them focused on the next play. Hockey is all about forgetting the past and having the mindset that you can always win. I think my main goal as an upper-classman is to always make the underclassmen feel comfortable and not be scared to mess up.

Do you have a favorite quote this season from Coach Savage to help get you guys focused and/or fired up at practice or a game?

After we won our first two games in the City Jamboree Coach Savage came into the locker room and told us, "What's better than 2-0... 3-0!". I think that quote really got our squad fired up and ready to go play our third game. The team faced some adversity in that game but when we got back into the locker room after the win, we all remembered that one quote from Coach Savage.

Baseball season is right around the corner. How has playing ice hockey and goalie helped make you a better baseball player?

Baseball has really helped me refine my goalie skills in more ways than most would think. First of all, I like to pride myself in having a superb glove hand in hockey. I would have to credit that to baseball and how similar catching the puck and the ball are. Second, my hand-eye coordination has for sure improved from my time playing baseball and I'd like to think that helps me catch more as well. Finally, having that same team mentality in baseball and cheering on your teammate has helped me do the same in hockey.