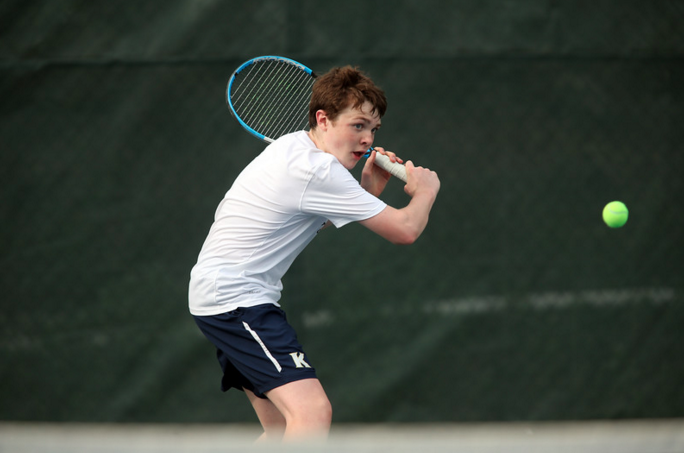 This Spring, as King Athletics pivots its focus to home training workouts, virtual team meetings, and sport video challenges on social media amid the Coronavirus pandemic, we would like to take time to recognize one of our standout Spring student-athletes for his dedication and drive to continue developing as an athlete and competitor.

We are excited to announce Sophomore Hugh Hentschel (‘22) is a recipient of King Athletics Core Values recognition for Perseverance. The Rye, New York native has not let any obstacles deter him from growing as a tennis player and excelling as a student this school year, despite the challenges of having the 2020 Spring season go fully remote. Instead, Hugh has shifted his focus and energy to “home training” for the upcoming United States Tennis Association tournaments that will take place throughout New England this summer. Along with leading the next wave of talented King Tennis players in North Stamford, you can count on Hugh to keep swinging away as his persistence pays off.

“Hugh is an extremely hard worker who is trying to be the best he can be at tennis. He is not going to let the coronavirus situation hold him back. He practices with his dad as well as conferring with his coach and continuing with his physical training. When things return to normal, he will be ready to compete again in USTA tournaments. He loves the King Tennis team and has contributed on every team Zoom call.” -- Tom Carey, Head Coach Varsity Boys Tennis

“Hugh has a strong desire to be a D1 collegiate tennis player. In addition to his excellent work ethic, he’s a nice kid who appreciates all that his family does by making tennis and coaching available. His demeanor on and off the court is exceptional and few try harder than Hugh when competing. He’s the player that will literally stay out there all day and night to win, but smile and congratulate his opponent no matter the result. To us coaches, that is the ultimate compliment for a tennis player and any athlete. I also love the way Hugh represents King School and is very proud to do so. While tennis is mostly an individual sport, he embodies the concept of team and supporting his teammates in practice as well as matches. Coach Carey and I wish we had a dozen Hugh Hentschels!” -- Rick Swift, Assistant Coach Varsity Boys Tennis

“Hugh is a close friend who has been a very important part of our team over the years. He’s pulled off some pretty impressive wins that have definitely helped us win more matches. He is one of our best players and has started at 2nd singles since the 8th grade. I’ve never met someone who is more obsessed with a sport than Hugh. He is a very hardworking kid and I look forward to seeing what he does for King Tennis in the future.” -- Mark Davies (‘20), Team Captain Varsity Boys Tennis

Congratulations and keep up the great work, Hugh!