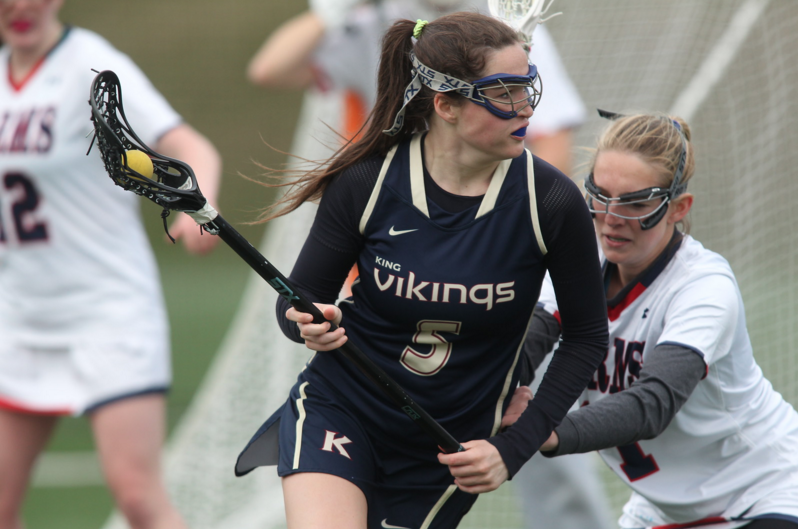 Congratulations to King School Alumni Athlete Morgan Riley ('18), who will be honored in May for earning the Young Woman of Distinction award presented by the YWCA Darien/Norwalk.

The award goes to recognize the outstanding accomplishments of a woman under 21 years of age and highlights Morgan's tremendous work with Harlem Lacrosse during her time at King.

After learning about Harlem Lacrosse (a school-based non-profit organization that has provided academic intervention, leadership training, and lacrosse development since 2008) in 2015 as a Sophomore at King, Morgan helped organize and lead the Varsity Girls Lacrosse and Varsity Boys Lacrosse teams in hosting the Harlem Lacrosse organization for a full-day lacrosse clinic that included drills, lunch, and a scrimmage on the campus of King School. Morgan continued her work with Harlem Lacrosse during her Junior and Senior year at King, providing an example of how "giving back" through the game of lacrosse can make a lasting impact on a community and a person.

Now a Freshman at Bucknell University, Morgan will join Tracy Fox, Debra Hertz, Heather Raker, Shiva Sarram, and Katherine Price Snedaker in being recognized at a luncheon on Thursday, May 9th at Woodway Country Club in Darien.

This year marks the 10th Anniversary of the YWCA Darien/Norwalk Women of Distinction Awards.  The award is bestowed in recognition of the outstanding achievements of a select group of women.  Local residents and business owners nominate women who live or work in Darien and Norwalk whose significant and unique contributions have made a difference in our community.

"We have remarkable women in our community doing extraordinary things on a daily basis.  The Women of Distinction Awards were started by the YWCA Darien/Norwalk as a way for women to support women.", said Aidan R. Welsh, President of the YWCA Board of Directors.

"By women supporting and highlighting other women we build a powerful, collective force that positively impacts our community as a whole."

This month also marks the return of Harlem Lacrosse to the campus of King School for more skills training and development and the chance to come together through the game of lacrosse. On Sunday, April 28 (11:00 a.m. - 12:00 p.m.), Vikings Varsity Girls and Boys Lacrosse teams will host PS 149 for a lacrosse clinic, lunch, and full day of activities. This past December, King Varsity Lacrosse teams spent a day packing and sending holiday care packages to Harlem Lacrosse athletes and now look forward to getting back out on the turf together for some lacrosse this Spring!