Back to King Graduates
Luke Buttenwieser '19 featured in the Stamford Advocate: "Luke is serious about traffic."

King connected with Luke Buttenwieser '19 once the article was published and he adds, "My journey and job with the Stamford Transportation, Traffic & Parking (TTP) Department started because I wanted to do a science fair project on the effects of roadway design on vehicle speeds. My physics teacher, at King Mr. Nelson, suggested I call the City of Stamford and see if I could put cones out on Newfield Ave. For reasons that are all too obvious to me now, you can't do that, but TTP was interested in my project and they gave me some areas to test their roadway design projects. I worked closely with Mr. Nelson and Dr. Schulman on my project and I spent my spring break outside with a radar gun across Stamford measuring car speeds. My project showed that the City's roadway design projects help to reduce vehicle speeds thus increasing safety. My project won the grade level award and I presented my findings to the Mayor. Here's the link to that article.

I was then asked to intern for the Traffic and Parking Department and I've been there since February 2019. I worked there after school and into the summer, took a break for college, came back for my five-week winter break, and now I'm back there part-time because there are no more in-person college classes.

I don't say this lightly, but it really is a dream come true. I'm so happy to be able to do something that I love and help the community as well. I really give King a lot of credit for giving me the opportunity to do this."

The article and photos below were printed in the Stamford Advocate Insider. 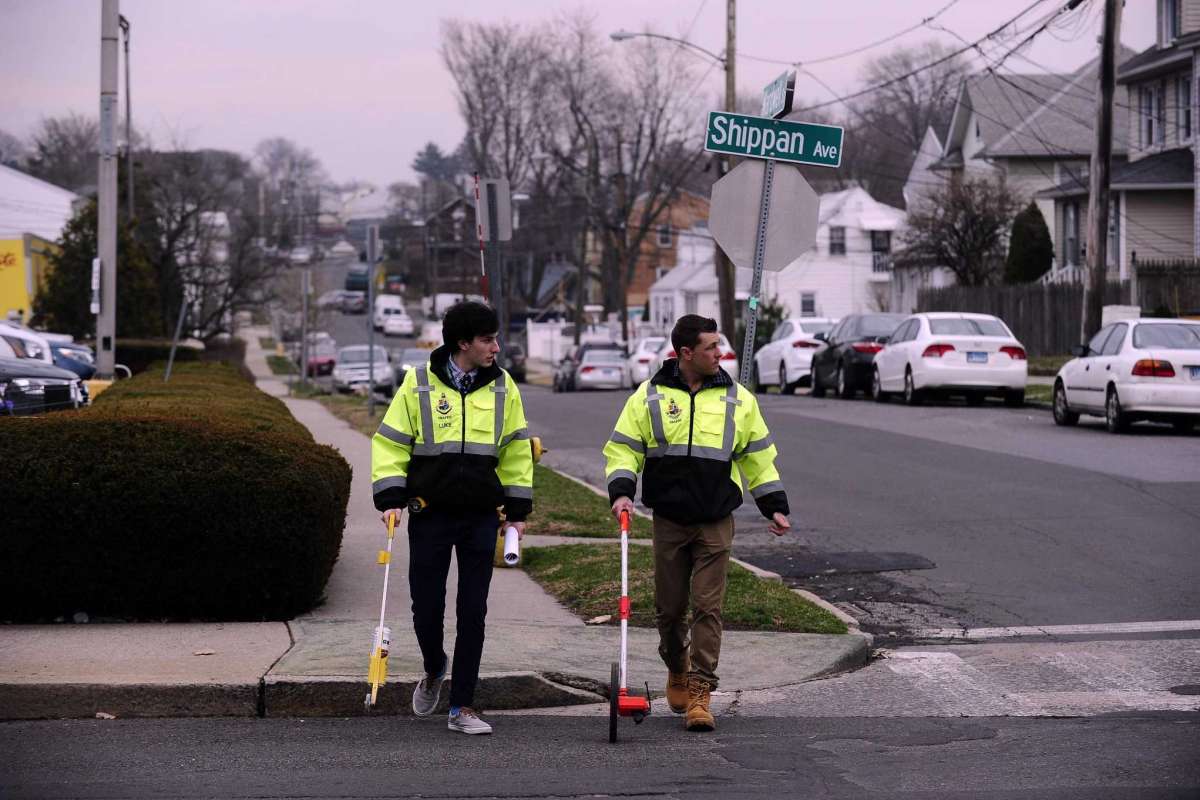 As a New York University student majoring in sustainable urban environments with a minor in transportation engineering, Buttenwieser, 19, was home recently for spring break and working as an intern in the city's Transportation, Traffic and Parking Department trying to make his city an easier, safer and quicker place to get around.

The first word that came out of Buttenwieser's mouth as a toddler wasn't "momma" or "papa" his parents tell him. "My first word was bus," he said during a recent telephone interview.

His favorite thing to do as a little kid was hop on the train in New Canaan, where he grew up until moving to Stamford in eighth grade, and ride the rails. Maybe his father being a pilot had something to do with it, but Buttenwieser says transportation has always been his favorite thing.

"This is exactly what I want to do with my life," he said.

Buttenwieser got introduced to the city Transportation Bureau Chief Jim Travers as a junior at King School. He had the idea to do a traffic study on Newfield Avenue as a project for the school's 2018 science fair.

He was first told it would cost hundreds of dollars to do, but someone suggested that he call Travers.

"When he called, did I think it would turn out like this? No," Travers said.

To complete his project, Buttenwieser become a paid intern, and his enthusiastic work made him a valuable addition to the department, Travers said. His dedication earned him honorary resolutions from the city's Board of Representatives and delegation of state legislators.

The department was in the midst of looking into some traffic-calming projects when Buttenwieser started his internship. Travers told him he was welcome to come down and write a by-the-book traffic study to analyze them. The calming measures, such as re-striping to adjust traffic lane widths and putting plastic stanchions on the roads to guide vehicle traffic, were being introduced to reduce car speeds and decrease accident numbers, which now total a little under 400 around the city each month.

Buttenwieser began studying vehicle speeds on the selected roads, while trying to remain as unobtrusive as possible. He said his mother has pictures of him hiding behind telephone poles and peeking out with a radar gun to measure how fast cars were moving.

"I spent my entire spring break doing that. The results were promising and the city's efforts at traffic calming were really slowing down the cars," he said.

The traffic study he produced ending up winning the science fair in his class and he went on to present his findings before Mayor David Martin in June 2018.

The following spring, Travers asked him to return as an intern, which he did, even staying on over the summer through the Mayor's Youth Employment Program.

Graduating from high school was not enough to break the pattern, and spring break this year saw Buttenwieser's return to the traffic department once again.

"He has been involved in every project in some capacity or another since he has been here," Bolella said.

This year Buttenwieser will see some of the plans he worked on come to fruition, such as the Shippan Avenue repaving, which will include added bicycle lanes.

"We are blessed to work with a lot of interns. But Luke is somewhat of an anomaly," Bolella said. "He is very ahead of his time as far as his age is concerned. He has an unbelievable work ethic and we are very happy to have him back for spring break. He is helping us out a lot."

Buttenwieser said he was happy to be there and hopes someday to have a job like the one Travers has.

"I'm taking my childhood love and passion and applying it to the real world and helping the community that I live in and that is something that is just so great to me," he said.