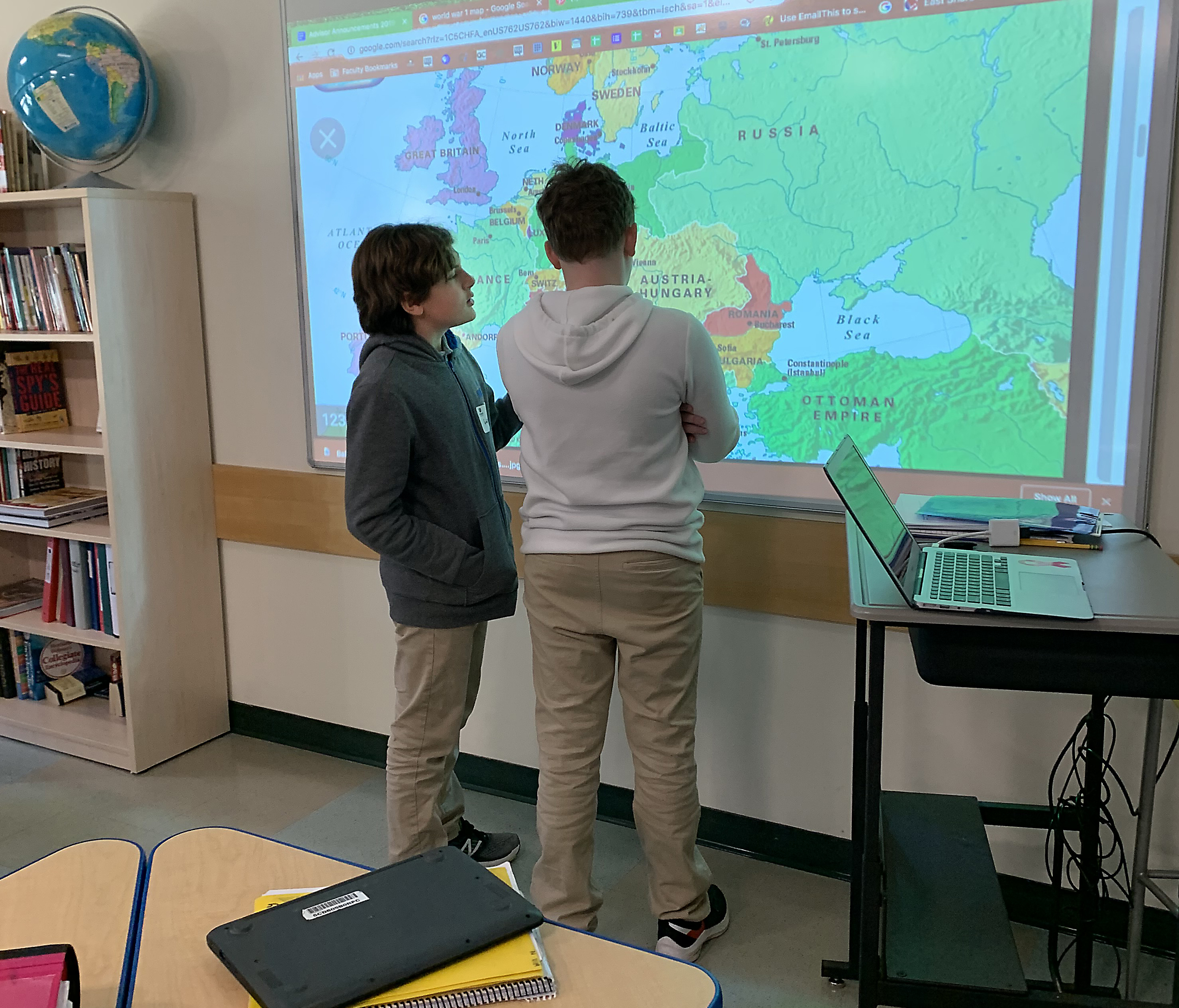 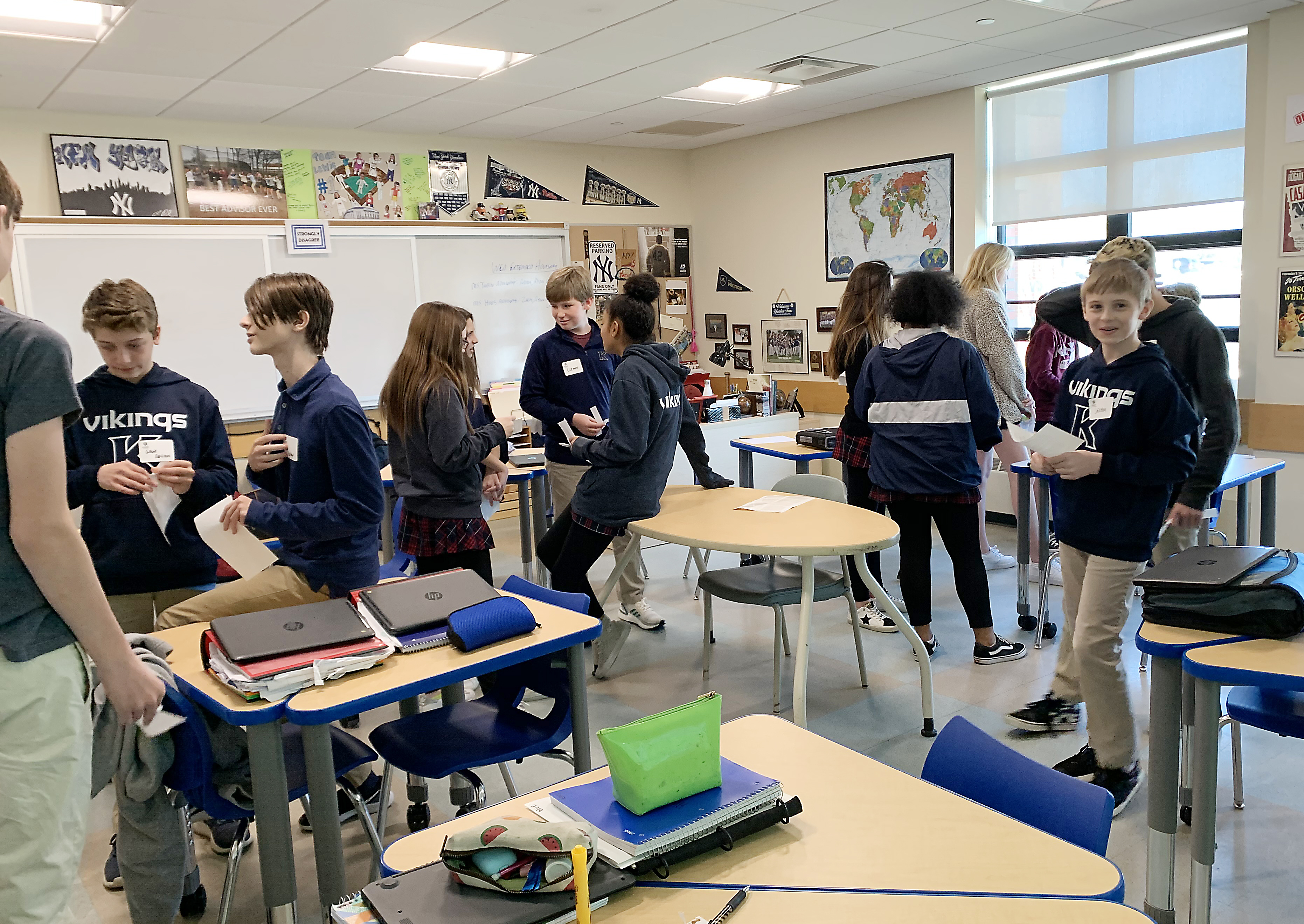 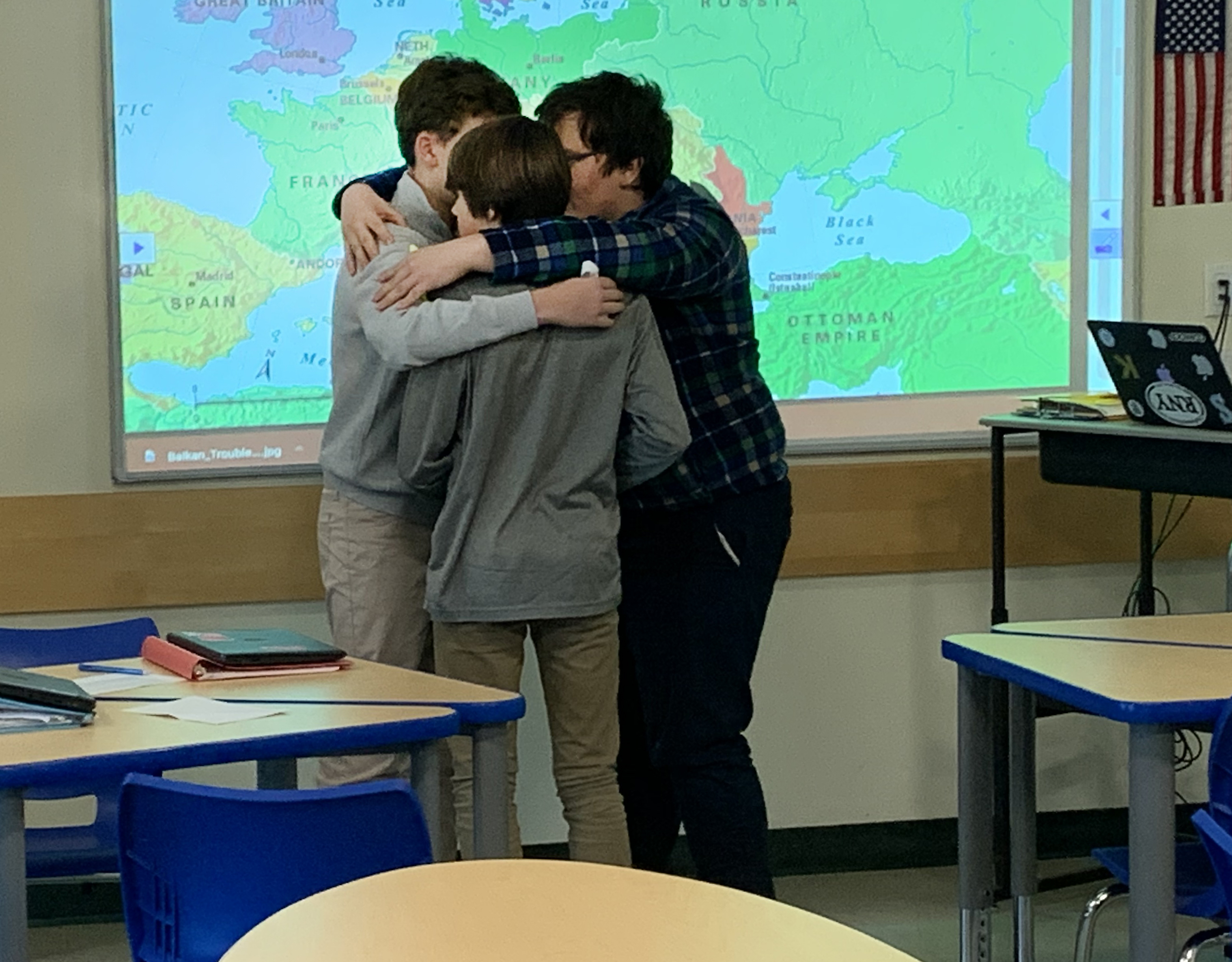 The threat of 'war' was looming in Ken Lewis's classroom in late January as students raced to form alliances and find a resolution before the end of the period. Fortunately, the war was not real and the project was a simulation but the role-play activity did offer a lively collaboration designed to introduce students to the country alliances that developed prior to the start of World War I.  Mr. Lewis, History Faculty, adds, "The lesson began with the students working on a Think-Pair-Share exercise to activate their prior knowledge on the topic of war; specifically, what war is; the reasons countries go to war; and whether war is justified."

This exercise aligned with the Grade 8 History curriculum as students explore the role of the United States in the world community, and in particular the challenges the U.S. has faced in foreign policy from its perspective as well as how it is perceived in the world community through the eyes of the many countries it interacts with, such as those in Asia, Europe, the Middle East, and Latin America.

The simulation was designed to promote critical thinking in three distinct steps:

The simulation that followed provided a deeper understanding of alliances by exploring the concept in an interactive and explosive environment. The students each role-played as diplomatic representatives of the eight major European powers prior to 1914 (Great Britain, France, Germany, Belgium, Austria-Hungary, Italy, Russia, and Serbia). There was an information sheet for each country, which set the scene by providing strategic data and explained the activity. Students started cautiously, feeling out the other representatives while carefully studying a map of pre-1914 Europe to strategize what countries to target for support.

The chaos began shortly after the simulation started, when each country began receiving notes from Mr. Lewis with important information at regular five-minute intervals. Some countries received a total of three notes and others four. The notes relayed information that at times clarified and other times confused the relationships between negotiating countries.  The rules stated that the representatives had to accept the notes as the truth and they superseded any information from another country; and that they had to be acted on before the next note was delivered. Amidst the chaos agreements were created and lost, and negotiations included lies, distortions, and fierce competition for attention. At the conclusion of the simulation the class reviewed the outcome, determining what alliances were created as war was ready to break out.

Mr. Lewis comments, "The simulation accomplished everything I hoped for. It was fun for the students while helping them understand the complexities of negotiation and how tenuous relationships can be between countries. Most importantly, I watched normally shy students come out of their shells as diplomatic representatives of countries, and fight for beneficial and strategic agreements on the eve of war. Really good stuff!"

The students were asked to reflect on the activity, and they had some interesting perspectives:

"The objective was to understand that the leaders of the countries had to make some difficult decisions on who to ally with during war time. I learned that a lot of these decisions were based off of a powerful military and geographical location."

"An important skill that came into play was communication because to create an alliance with another country, you both had to talk about why this alliance would be beneficial for you. We were also receiving small pieces of intelligence that were to help us choose who we should or shouldn't ally with. If you had old allies from this process, I went and spoke to them about the intelligence and asked them for advice."

"I made all the right decisions and ended up in a good position when the war started.  I also communicated very well and made sure my allies knew what my terms were."

"Some of the struggles that went on during this activity were that people could be lying about the facts they were sharing with us. We did not know if other countries were going to betray us at any point in time."

"I was proud of the way my partner and I communicated throughout this activity. This is because it forced me to talk to other people and I feel like I did a good job on that part."

"This activity definitely helped me learn more about the detailed and complex nature of alliances. It also taught me how hard it is to decide who to trust, and the stress that is thrust upon these countries when making these decisions."

"Being a part of the lesson and being able to experience things up front has left an impact that I wouldn't have gotten from a normal discussion."

Learn more about the Middle School program at King.