Final Day: King students continue their journey of learning and discovery in Greece 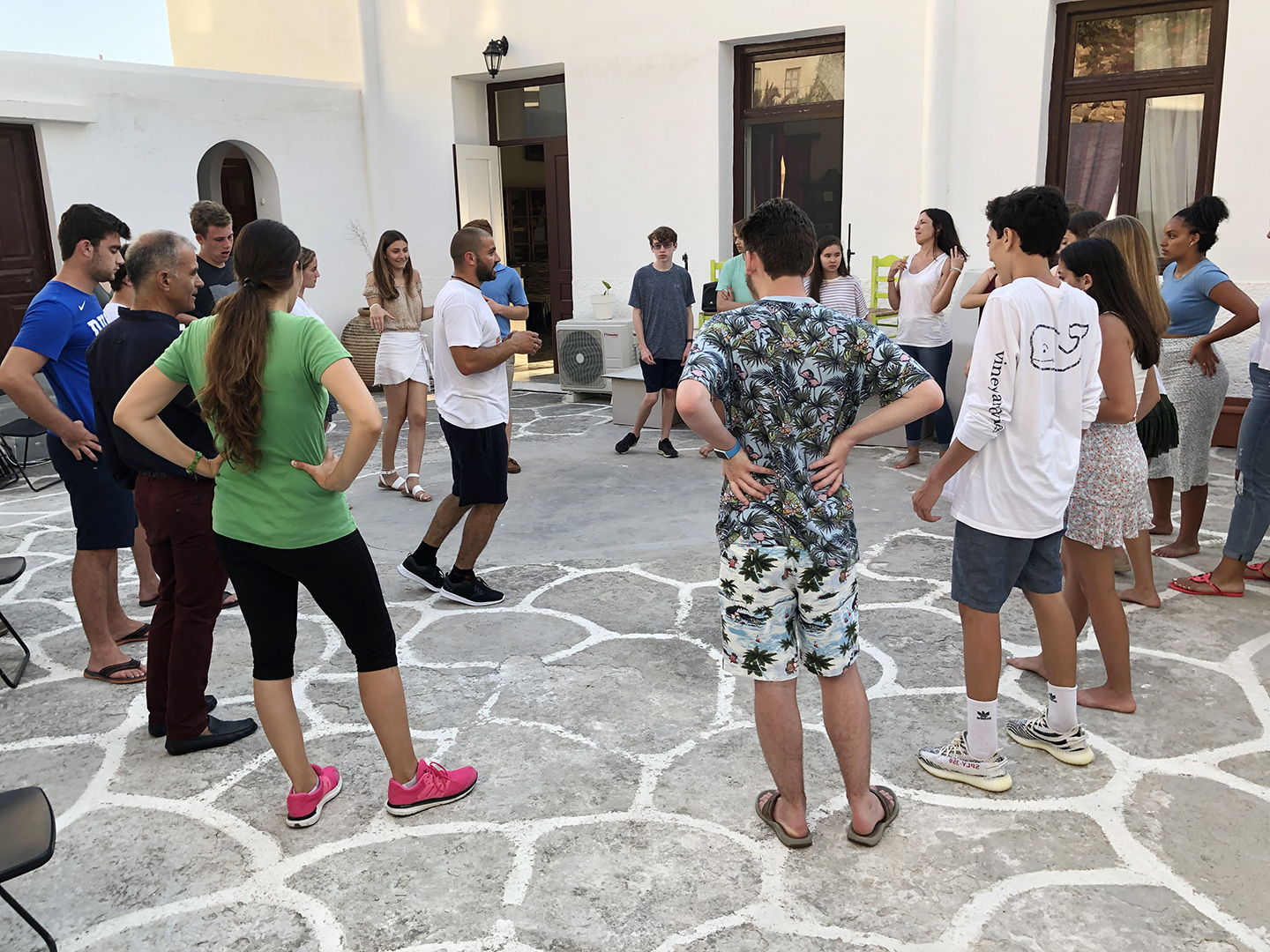 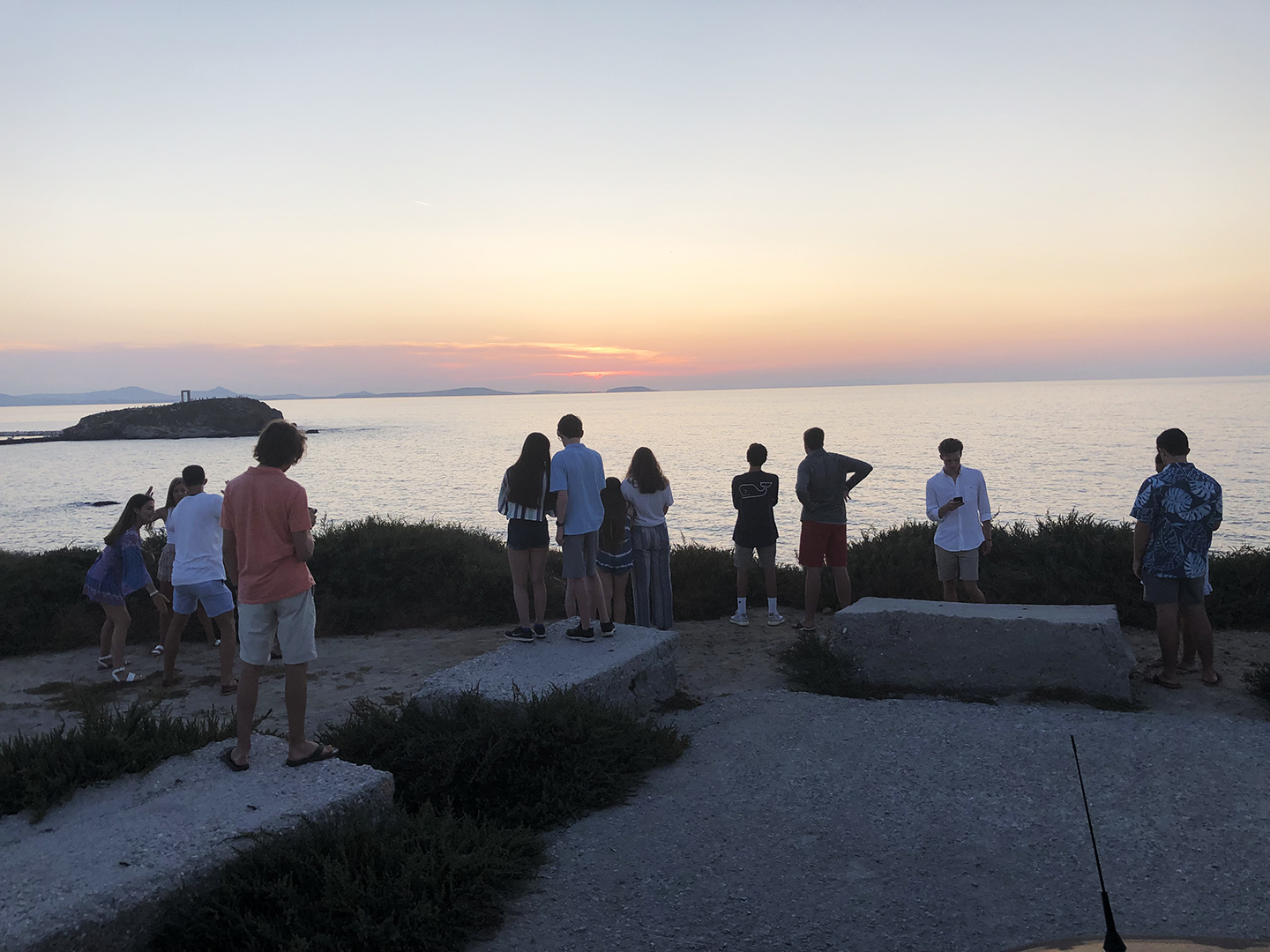 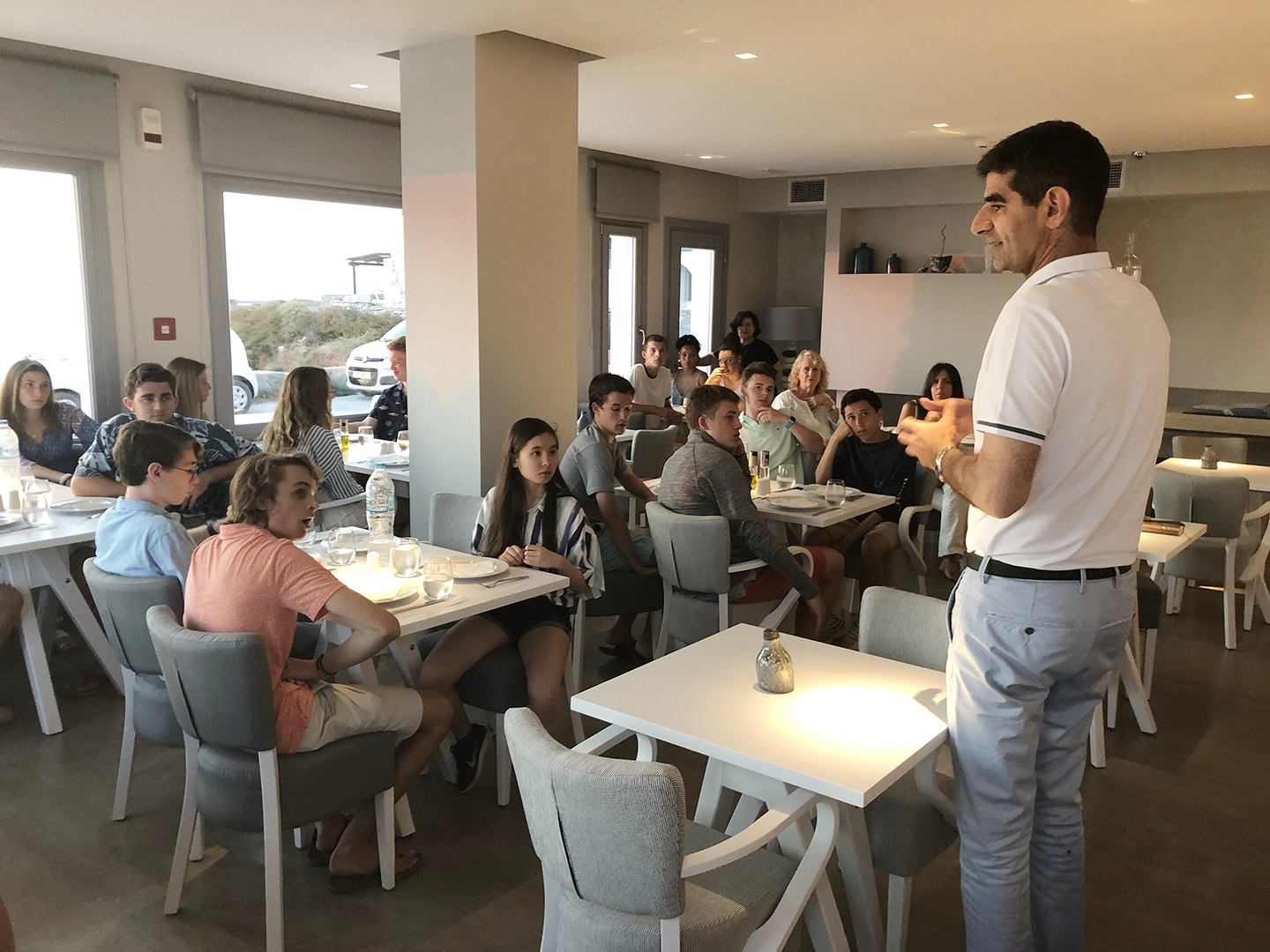 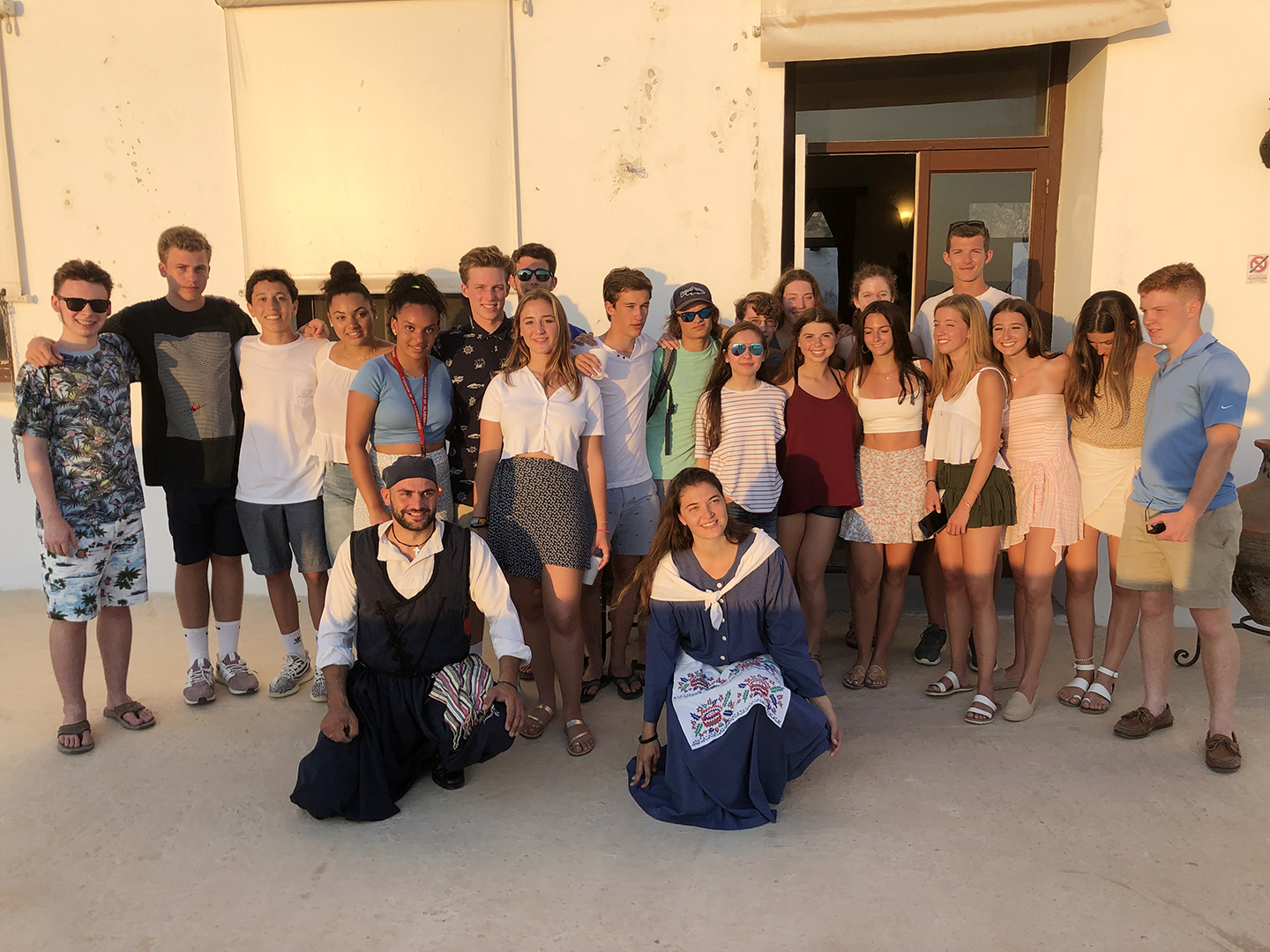 Update from Greece on June 24, the final day, from Christos Galanopoulos: "Our time in Naxos was truly fantastic and exceeded our expectations. After visiting the Sanudo castle, the next two days we visited two picturesque towns and appreciated the warmth and unique folklore of the Naxian people. We also visited a wonderful temple dedicated to the goddess Demeter, indicative of the agricultural richness of the island. The next day we visited a rare 7th century BCE statue of a Kouros, discovered fallen in a family's garden. We spent some time bathing in the pristine waters of the island and dined at one of its local tavernas. Yesterday, we took the ferry from Naxos to Piraeus in Athens, checked into our hotel, and dined in a restaurant with a marvelous view of the Acropolis.

We were able to interview the mayor of Naxos, who also oversees four additional Cycladic islands as a voting district. Our students asked key questions and the mayor commented on their intelligence. A particularly significant topic of discussion was how Naxos will balance its increasing tourism and its rich agricultural society and culture. The discussion indeed has global ramifications in many places in the world and Naxos presents a key example. The mayor was of the opinion that a balance will be found, as the Naxian people realize the economic potential yet are deeply connected to their way of life. Our students expressed sincere hope that Naxos will succeed in this hugely crucial endeavor.

Today, we are getting ready to go to the international Athens airport and fly back home to the US. We will have some time in the morning to visit the monument to the fallen Unknown Soldier and watch the change of the Guard at the Greek Parliament. It has been a very rewarding cultural and educational journey. Our students have gained wonderfully rich experiences and knowledge that will give them valuable perspectives and will strengthen their moral character."

Thank you to Mr. G for these thoughtful and interesting recaps! Safe travels to our students and chaperones. 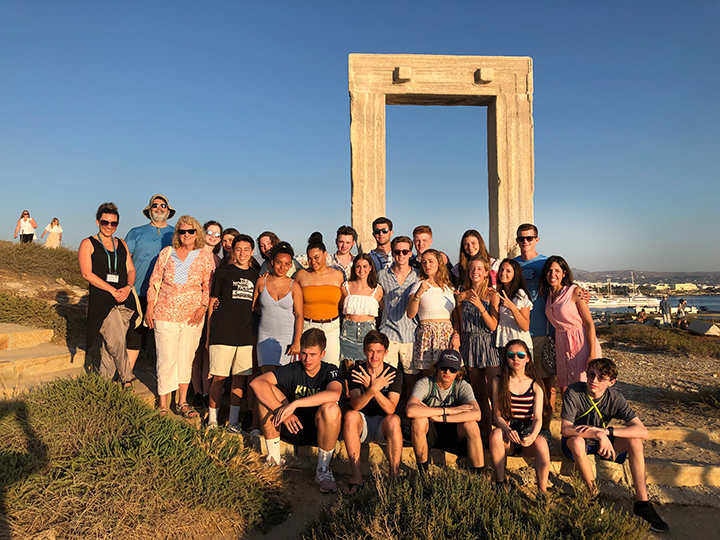 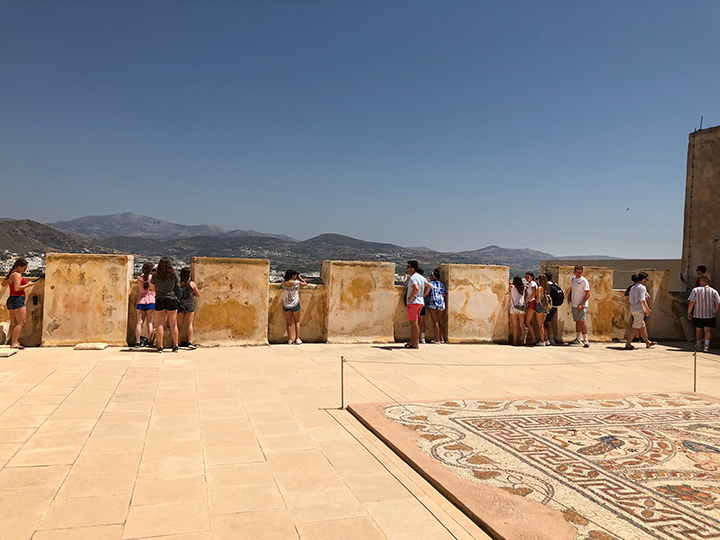 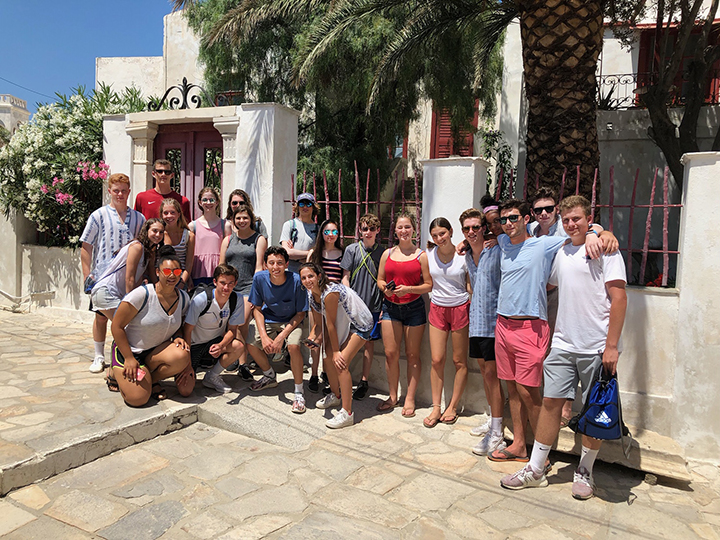 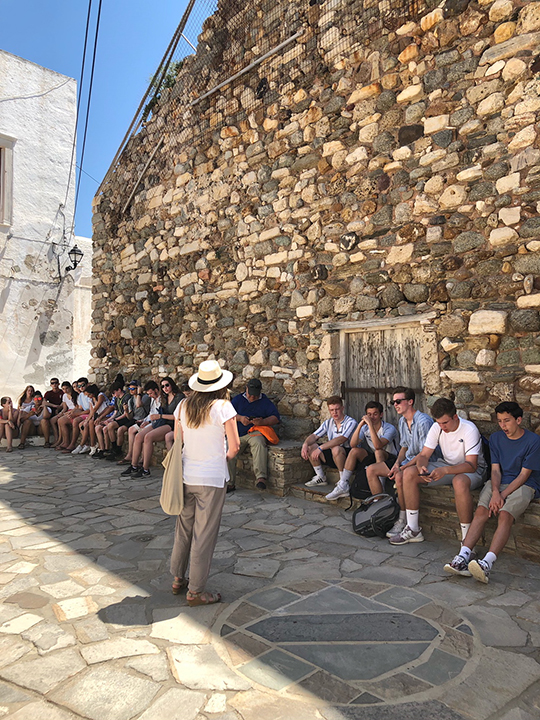 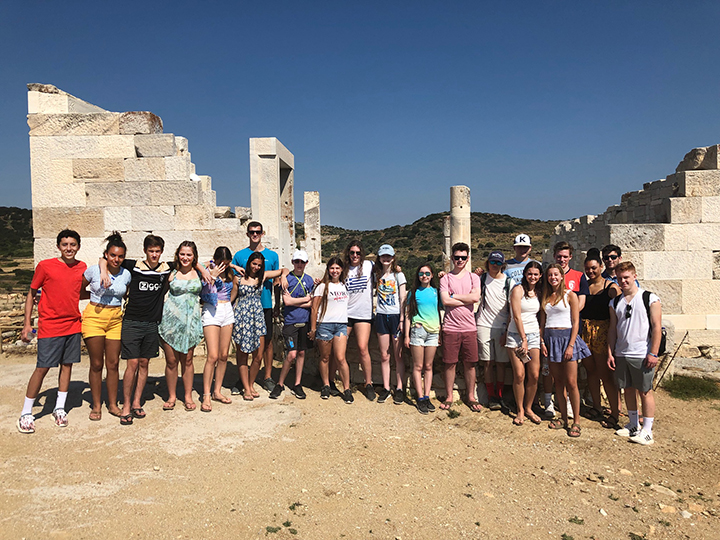 Greece update, June 21, from Christos Galanopoulos, "We are on our second day in Naxos island, the largest of the Cycladic cluster. Yesterday we visited the castle of Marco Sanudo, Venetian founder and Duke of the Archipelago, which included much of the Aegean territory. The Venetians ruled Naxos from 1214 to 1566, and left their indelible mark on the island's architectural landscape. Sanudo's castle is an imposing structure that surrounds the main town and port. We walked on its alley ways, visited the Catholic Church, and enjoyed the view. Sanudo chose Naxos as the capital of his Duchy, believing rather accurately that this was the spot where he could see most of the islands of the Aegean. After dinner, our students strolled in the port of the island, where some of the boys engaged in a short soccer match with some of the local kids. I personally liked this experience because it was wonderful to see kids from distant parts of the world mingle and enjoy each other's company for a short while. Our students gained a rare experience of the unique synthesis of Venetian architecture on a Greek mediterranean landscape. Meanwhile, they continue to experience Greek hospitality and the richness of the mediterranean diet. They are learning significant historical and life lessons that will certainly enhance their aesthetic, ethical, and cultural appreciation of humanity and of the earth.

This morning, we are preparing to visit small but historically rich towns for which Naxos is known. In the afternoon, we will enjoy some downtime and will a refreshing swim on one of the beautiful, pristine beaches here." 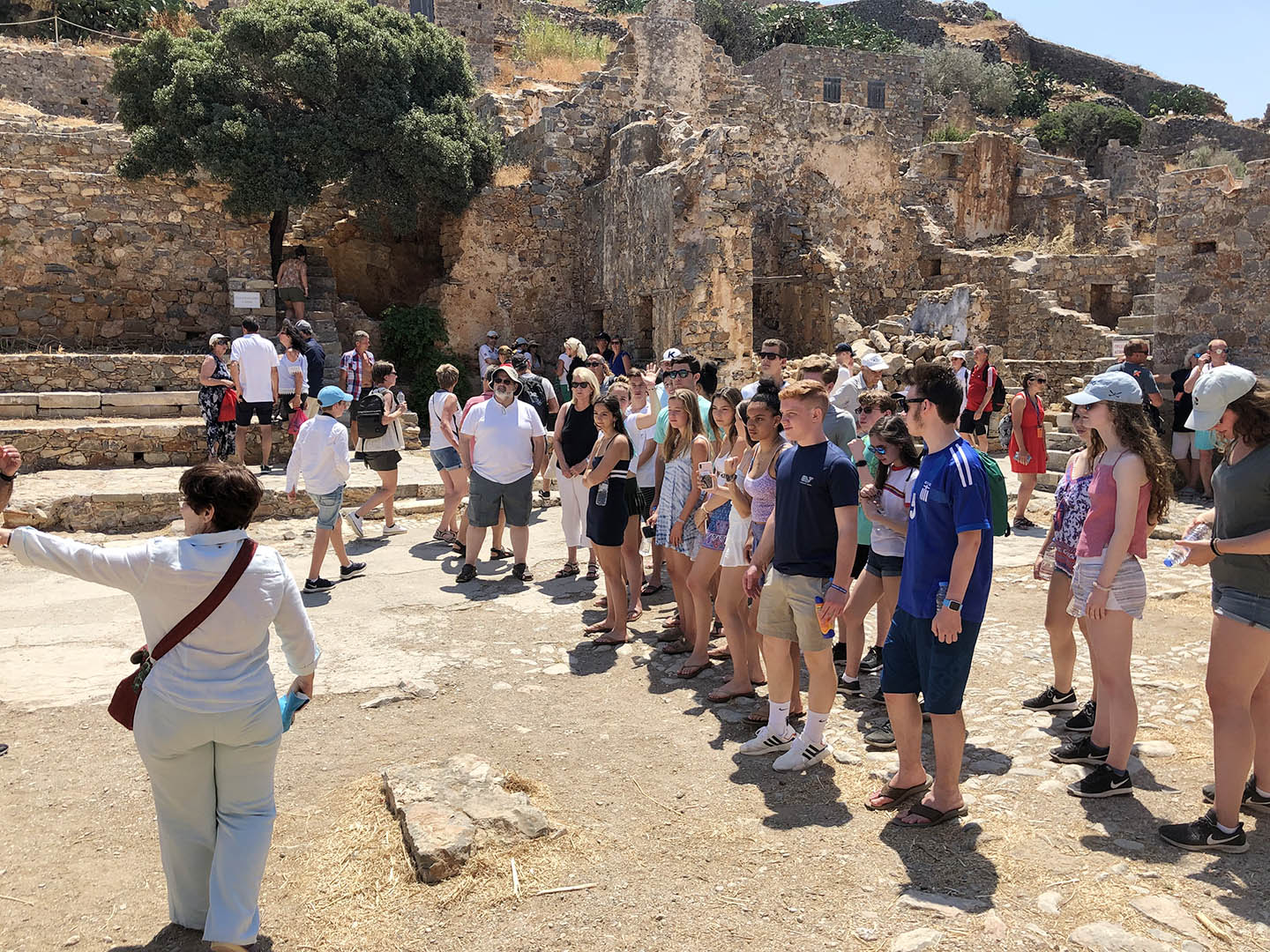 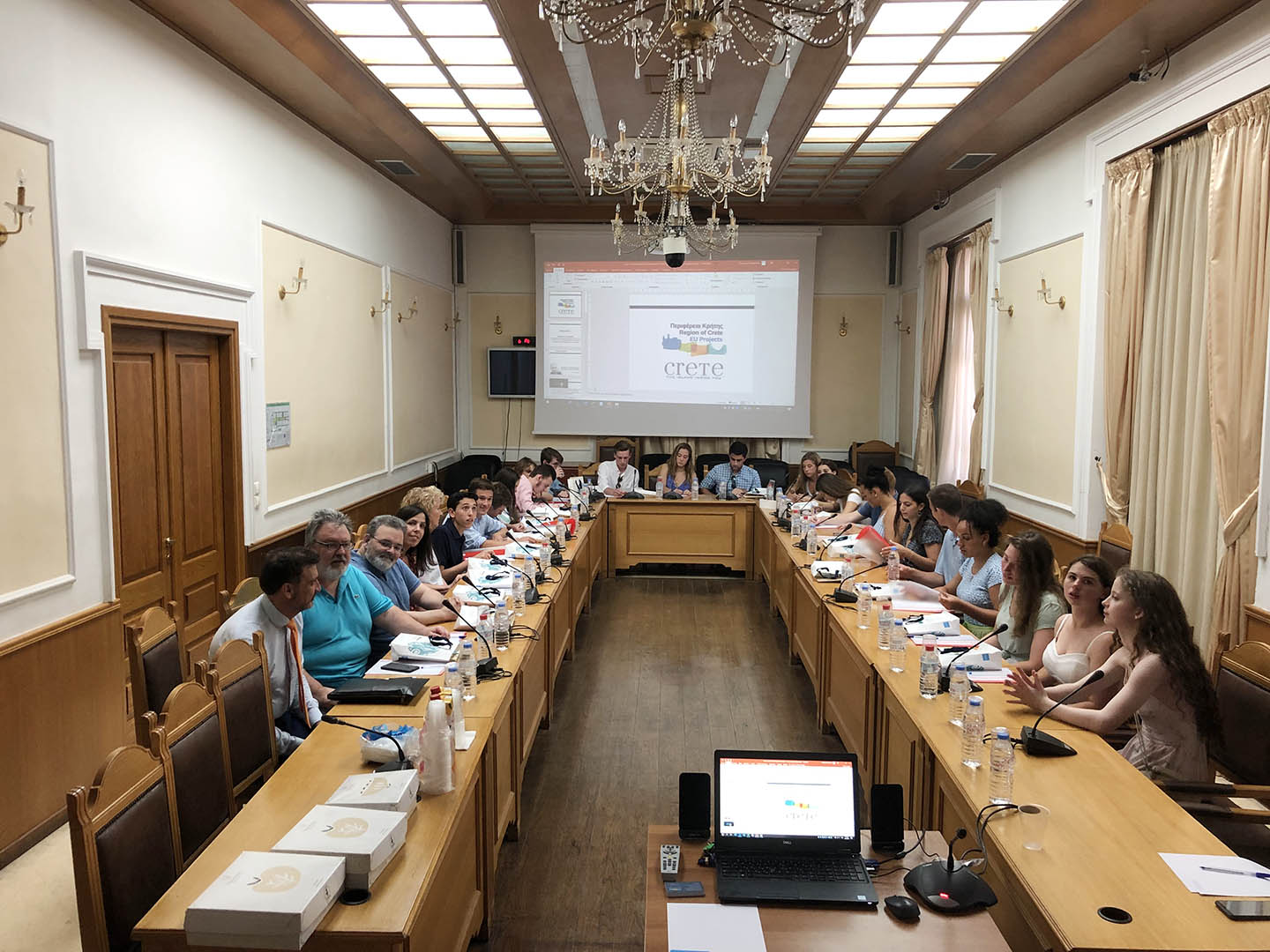 Greece update from Christos Galanopoulos, "Yesterday, June 18, we visited the islet of Spinaloga on the Eastern side of Crete. The islet has a unique history, serving as a leper colony in the 19th and 20th centuries up to 1957. It has become famous partly due to the best-seller The Island, by Victoria Hislop. The lepers are known to have secretly helped the allies during WW 2 as code breakers. The students enjoyed the ride and short cruise on a beautiful, sunny day, and learned the history of the islet from our local tour guide. They marveled at the deeply moving human story, full of longing and passion, and reflected again on humanity's struggles.

In the evening we had a rare opportunity to be invited to the government headquarters of Crete and interview Dr. Kotsoglou, vice-governor of administration and e-government in all of Crete. Dr. Kotsoglou is also general manager of a chain of hotels in Crete. He was enthusiastic about giving us the opportunity, answered our students' questions, and commented very positively on our students' knowledge and demeanor. I can't describe how proud I was of our students. They were true ambassadors of our school and our country." 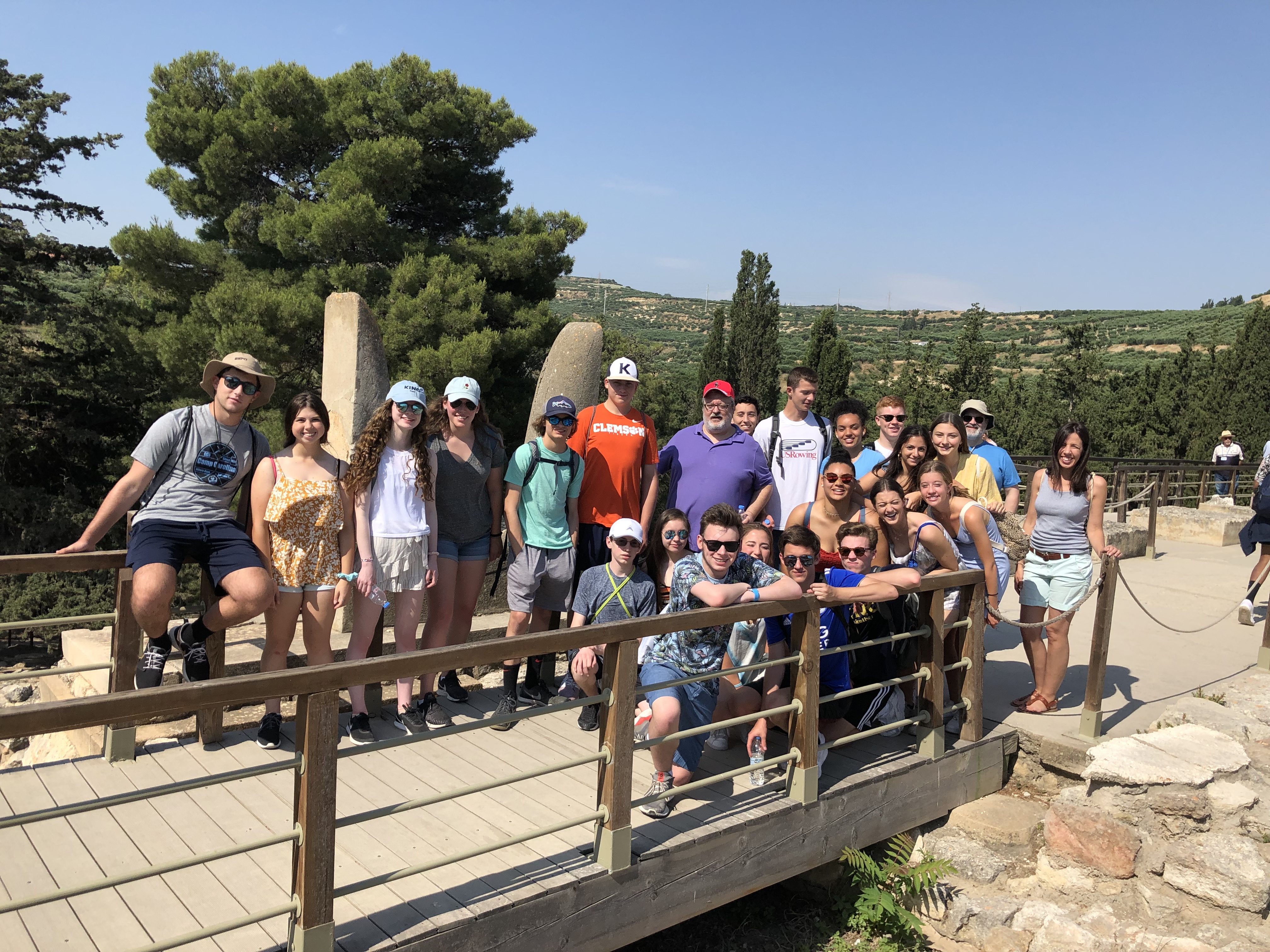 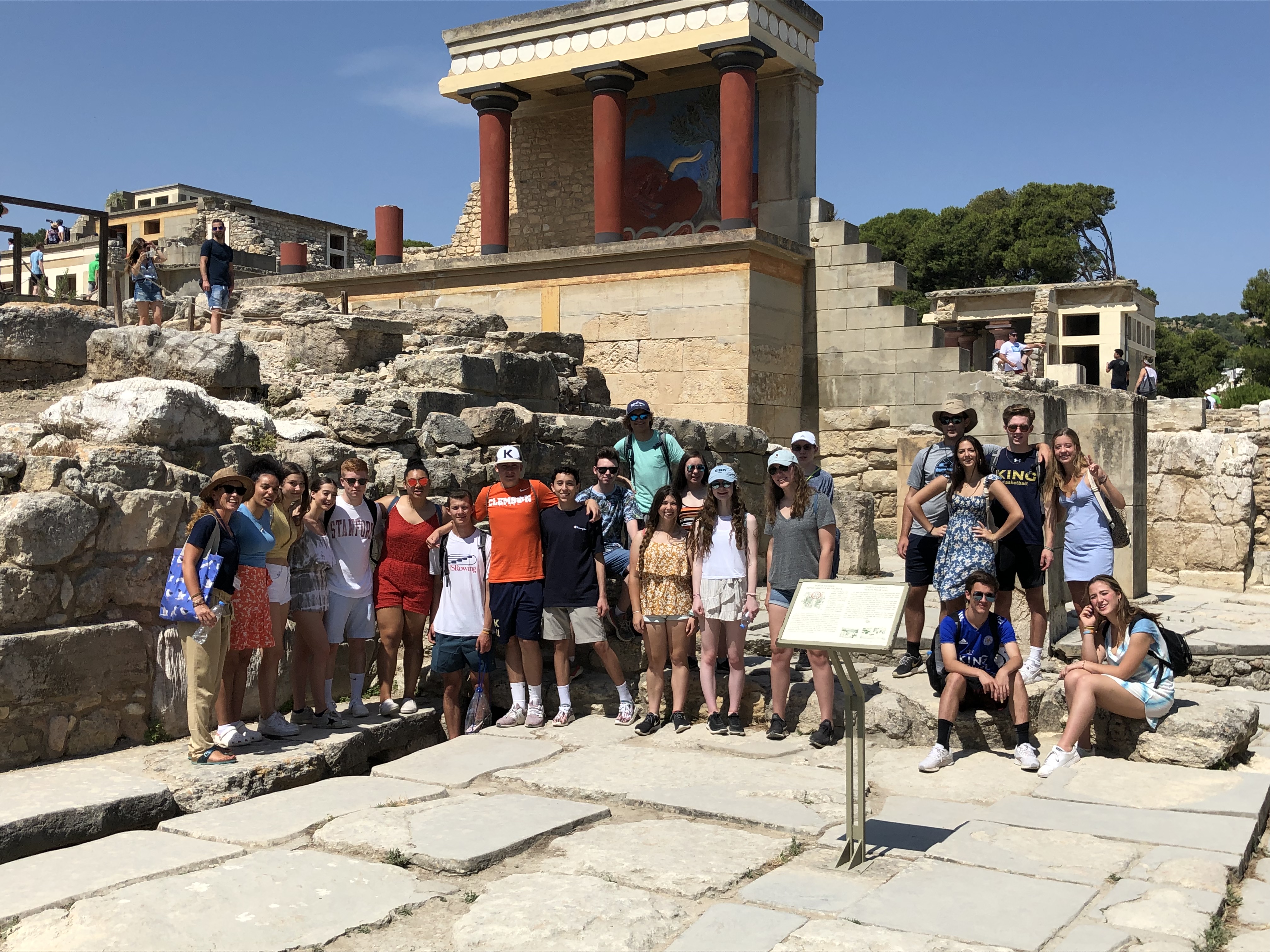 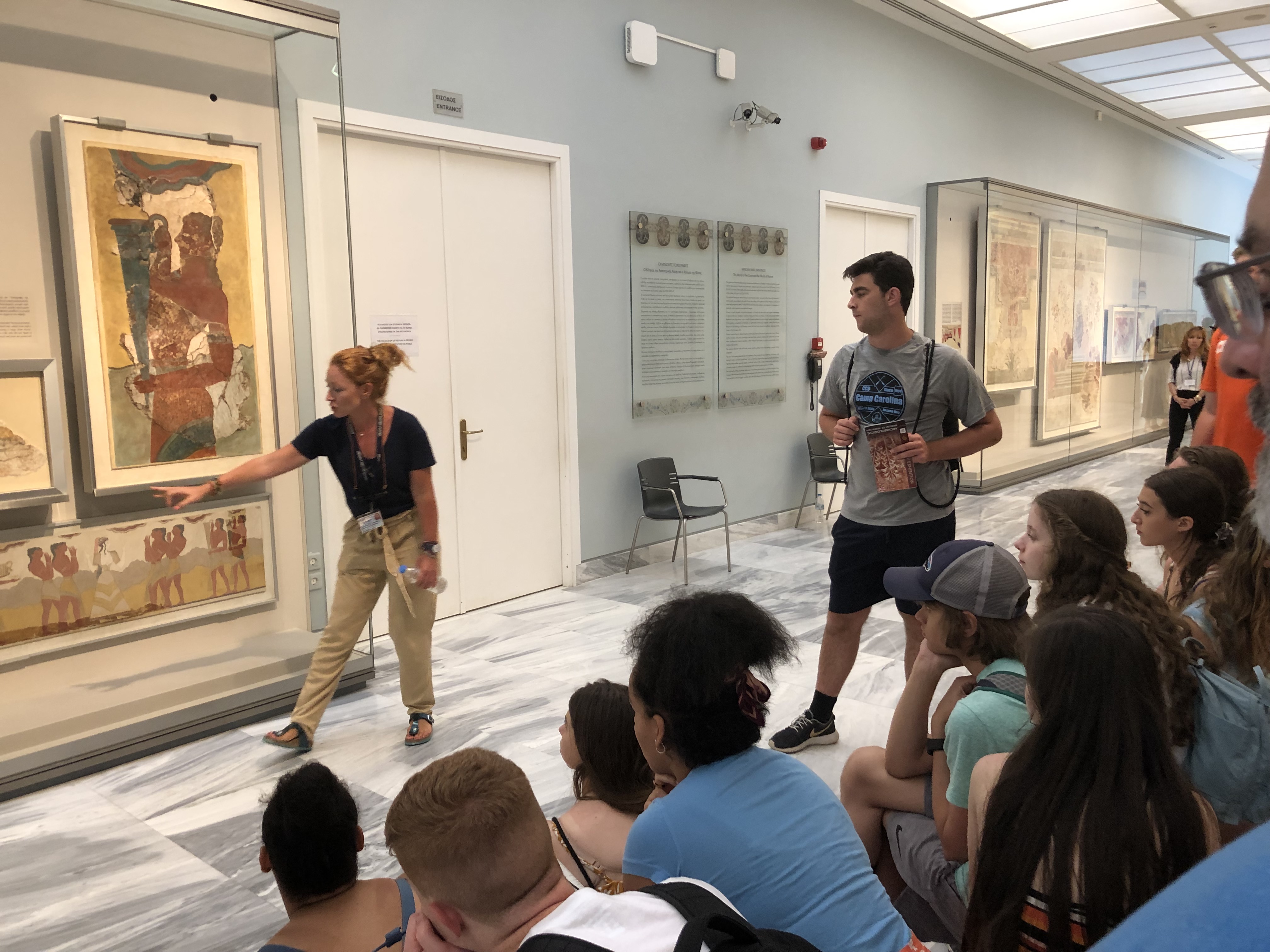 Greece update for June 17, from Christos Galanopoulos: "We visited the Minoan Palace of Knossos, built ca 5,000 years ago. With the help of our tour guide, a registered archaeologist, the students debunked the assumption that in ancient times people were less civilized than in modernity. Surely this was accomplished by visiting the Acropolis and the museums in Athens. Their understanding was further solidified by learning that Knossos had flushing water and a sewer system while cities like Paris and London did not have them up to the 20th century of our time. By examining their art and the architectural ruins, our students learned that the Minoans were a people who valued peace, nature, and beauty, and celebrated this life rather than dwell in the afterlife. Women lived in profound social equality much more so than in modern times. The government had elaborate patterns of trade and an administrative system of redistributing wealth to their people. Debunking the myth of a primitive ancient past and the myth of progress gave our students fresh perspectives on history, broadened their horizons, and equipped them with a healthy curiosity about the extent of human accomplishment and its future potential by examining its long, rich past." 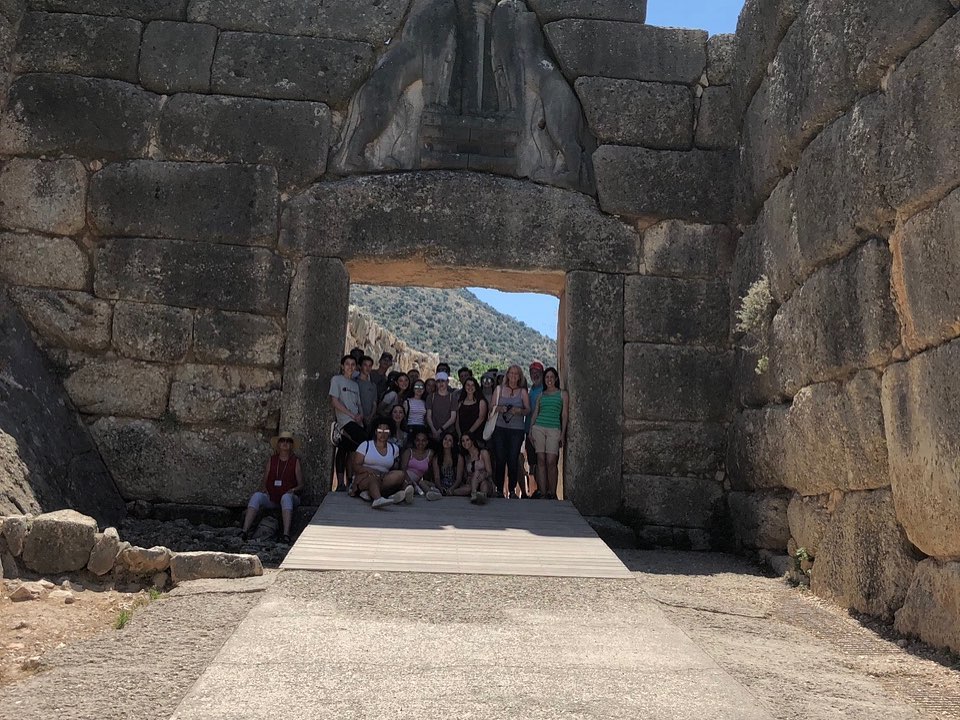 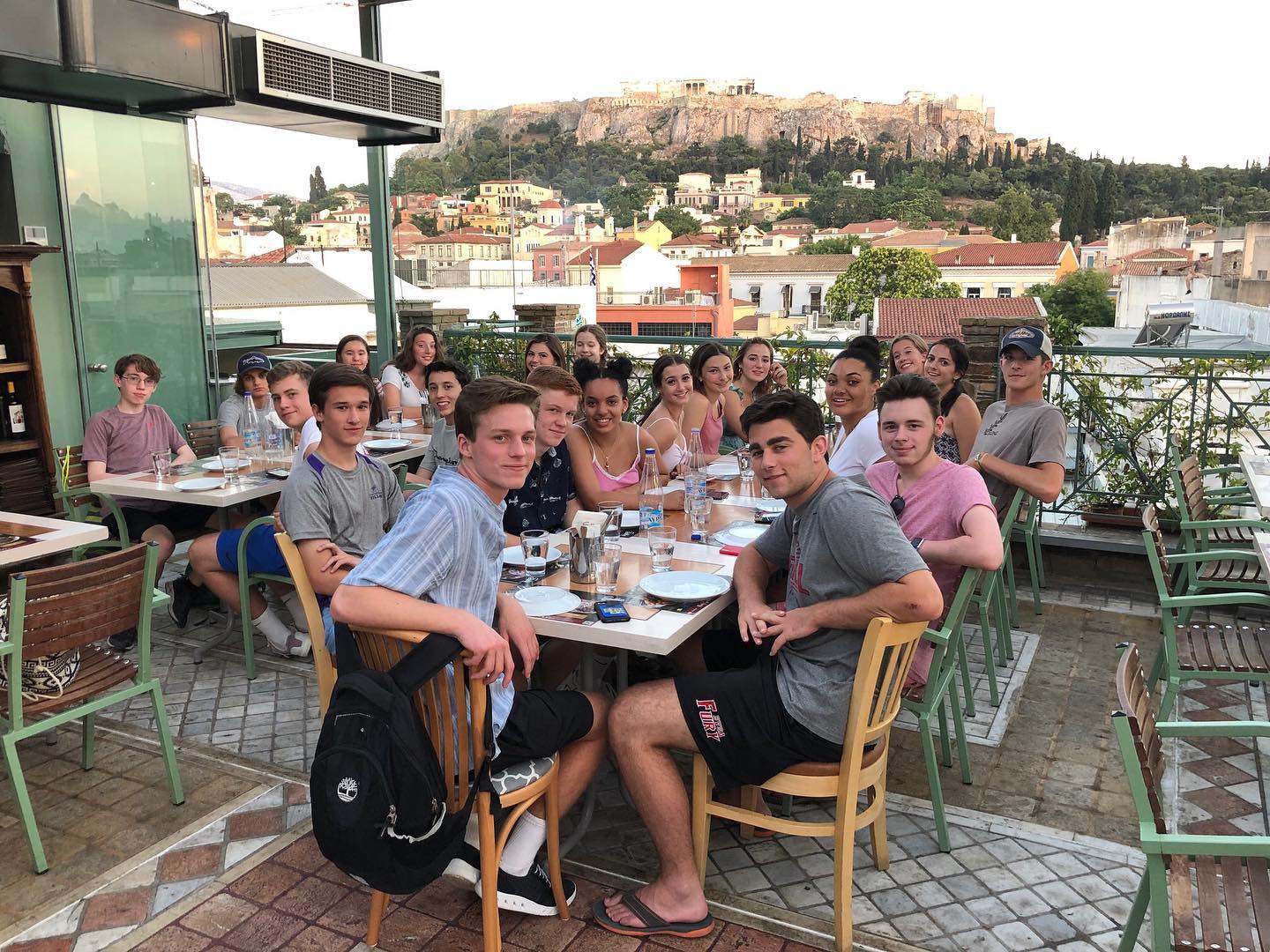 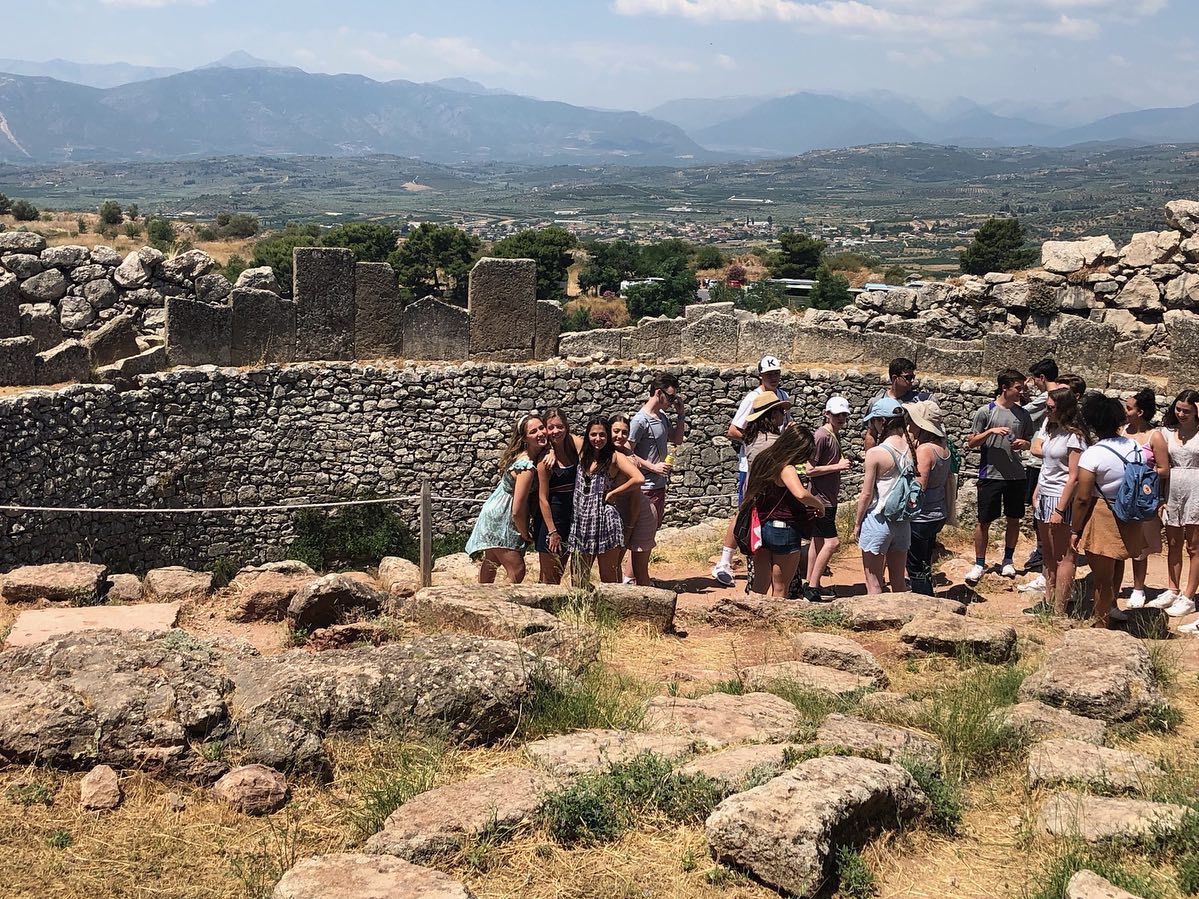 Day Two: Greece update from Christos Galanopoulos: "Yesterday we visited the Mycenaean ruins from over 3,000 years ago. This is the famed land of King Agamemnon, immortalized in Homer's Iliad and Odyssey. Our students learn important lessons: Is the lions gate depicting lions? Were the Cyclopean Walls built for defense or show of power? Was the Trojan War over beautiful Helen's abduction or for control of the Mediterranean trade? Most importantly, they learn to respect and marvel at the ancient past and the importance of preserving its record in order to preserve humanity and gain inspiration for its future." 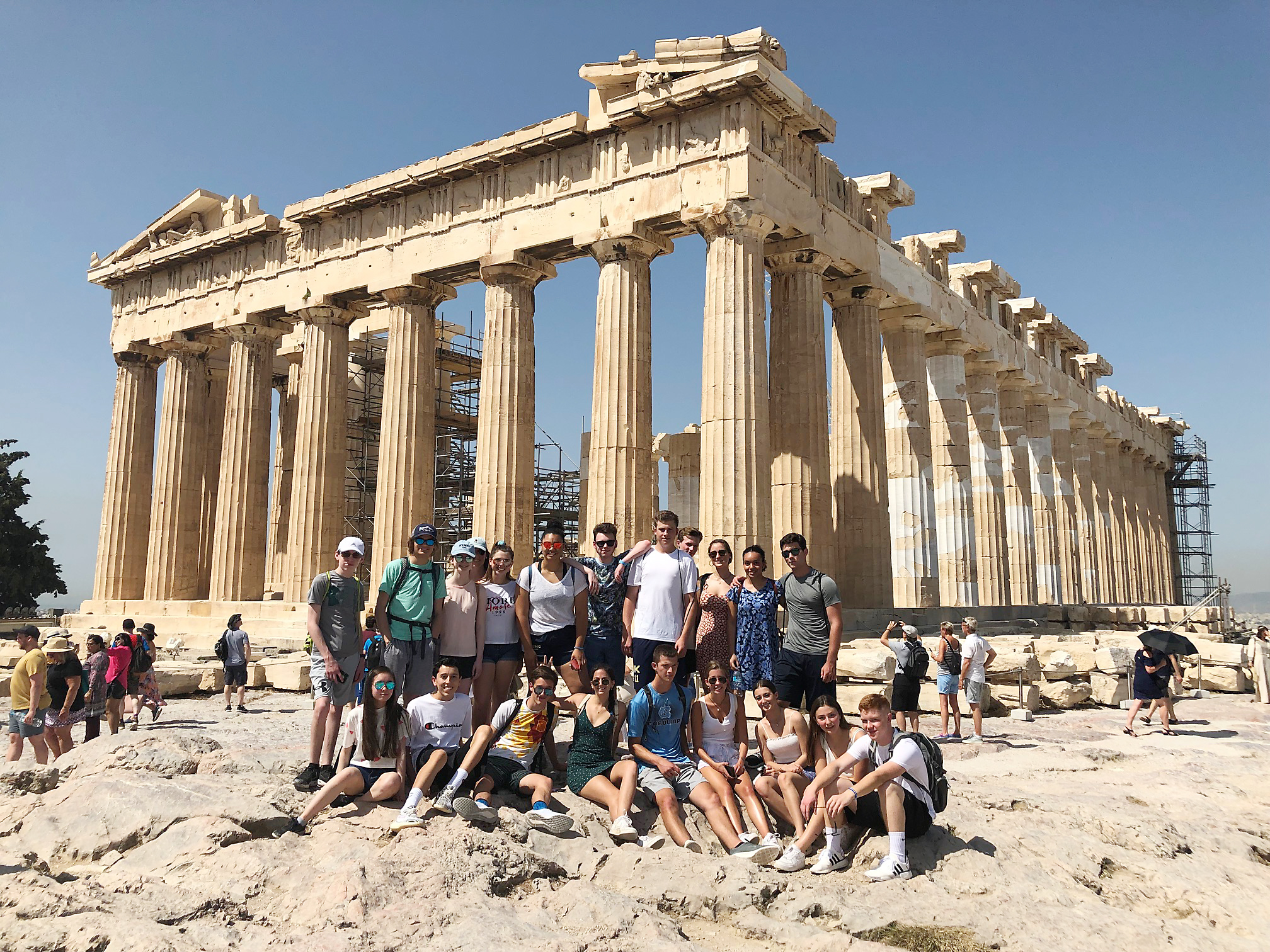 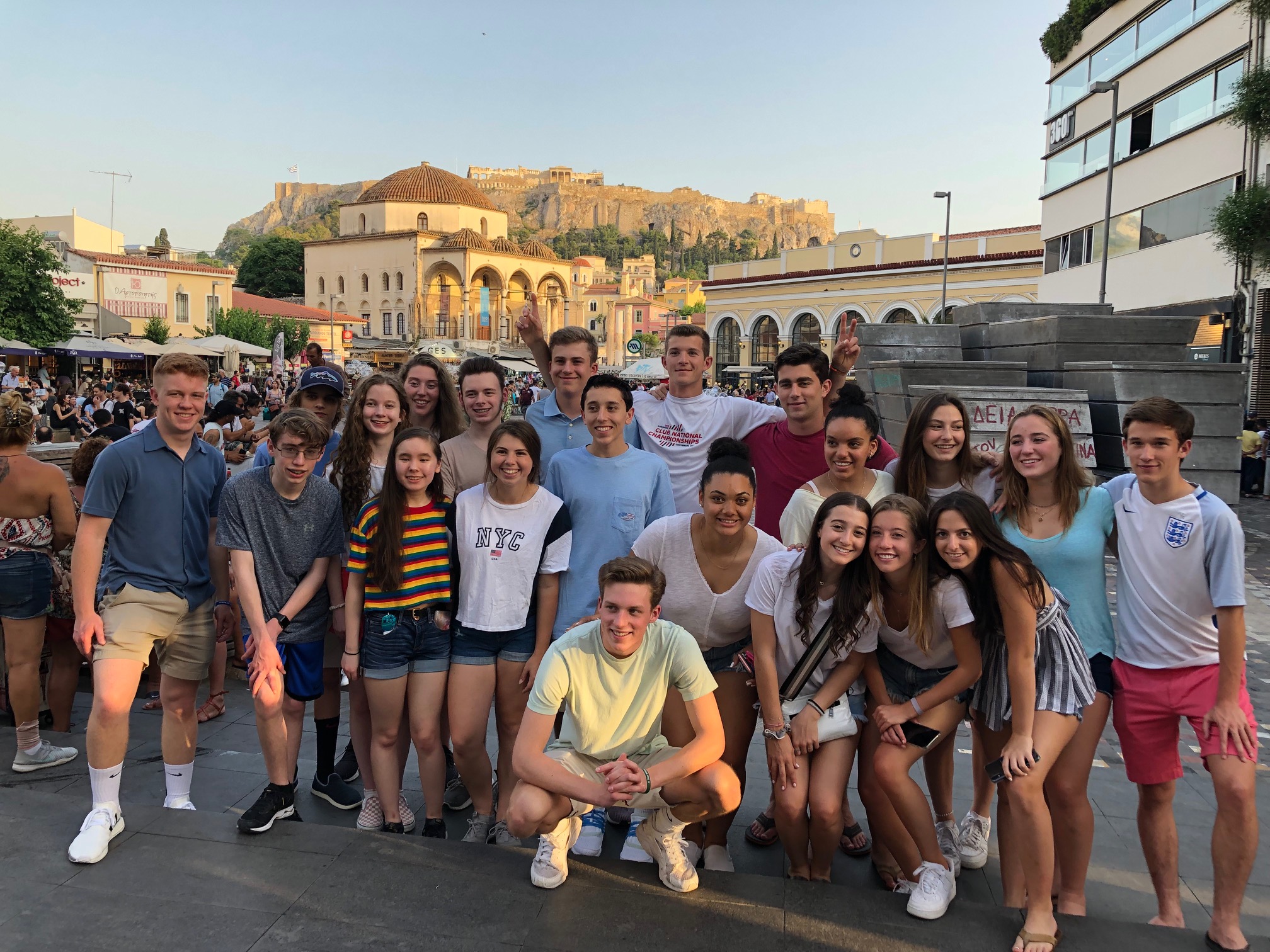 Day One: Greece, from Mr. Galanopoulos: "We had a pleasant flight, arrived at our hotel and settled in, then went for a good walk around Old Athens. We had dinner in Old Athens and got back to the hotel for a good night's sleep. The students are becoming acquainted with a historically rich culture, people who sustain a good quality of life in spite of economic difficulty, people who find creative ways to live fully. I am very proud of our group of students who are already showing a willingness to absorb the experience and respectfulness for the society that is hosting them This morning we climbed the Acropolis rock and visited the Parthenon, home of Athena, goddess of wisdom. Afterward, we went to the adjacent museum. Our students were in awe as they listened to the tour guide talk about the history and the significance as a classic monument of the birth of democracy. They reflected on the story of the Elgin marbles and the mythology depicted on the freezes."